We had our physical/hybrid meeting of the month take place last Friday at the Augustine United Church in Edinburgh. After a short welcome and introduction from our President Mark, we were handed over to our invited guest speaker, Dr Max Ruffert from the University of Edinburgh. The society members watched the talk from either the Church or on zoom and we also streamed the talk live on YouTube. 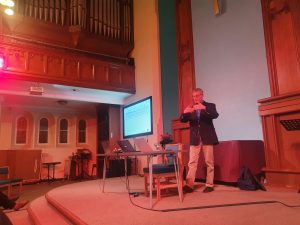 Dr Ruffert gave a dynamic talk on gamma-ray bursts, black holes, neutron stars and gravitational waves, and provided excellent practical explanations for his theoretical work. He began with an overview of the history of gamma-ray bursts, starting with the monitoring for atomic bombs during the Cold War that first led to their detection. He then took us through the current observations asbright and distant flashes that are spread across the universe and the theories of what could be causing them. He provided various theoretical ideas of mergers and collisions of neutron stars and black holes and explained that through these processes both gravitational waves and neutrinos (also known as the ghost particle) were produced. We were taken through simulations that applied these ideas and also audio examples, so that we could hear the sounds of gravitational waves. As observers and astrophotographers we are considering the light from the sky as emitted energy, instead gravitational waves and neutrinos are both elusive and hard to detect and they require many large underground detectors that are essentially ‘listening’ to measure the waves.

Following the talk, the members in the room, on zoom and also on YouTube had the opportunity to ask questions, which Dr Ruffert answered very thoroughly. The talk provided much discussion and had a wealth of interest amongst all the groups watching.

Alan Pickup next presented the Sky in March. He took us through the various astronomical objects to look out for this month and as always provided us with interesting snippets of information. The Zodiacal light, is a cone of light reaching from the sun below the horizon and thought to be caused by dust from sources such as meteoroids. Another interesting feature to spot this month that Alan highlighted is the Leo Triplet which is found in the constellation of Leo. The Hamburger Galaxy, is also known as Sarah’s Galaxy and alongside M65 and M66 forms the Leo Triplet. Alan informed us that Sarah’s Galaxy was perhaps named after the poet Sarah Williams, who is known for writing the poem ‘The Old Astronomer to His Pupil’ and is from the fictional viewpoint of Galileo at the end of his life. Here are a few lines from the poem that Alan shared with us:

“Though my soul may set in darkness, it will rise in perfect light;
I have loved the stars too fondly to be fearful of the night.”