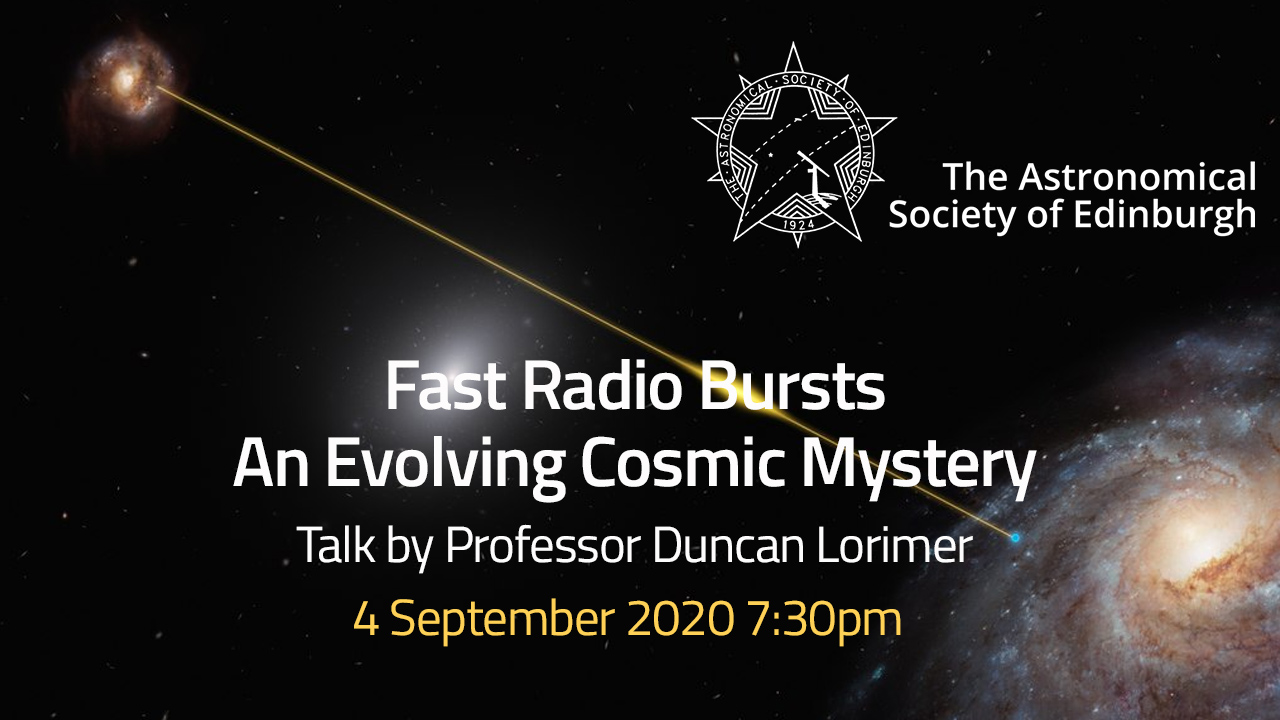 We will also have the Sky in September.

Fast Radio Bursts are millisecond-duration pulses of unknown origin that were discovered by an undergraduate student at West Virginia University in 2007. A decade on, with over 100 further bursts currently known, fast radio bursts remain enigmatic sources which parallel the early days of gamma-ray burst astronomy in the early 1970s. I will tell the story of their discovery, summarize what we know about them so far, describe the science opportunities these bursts present, and make predictions for what we might learn in the next decade.

Biography :Originally graduating from Cardiff University with a BSc in Astrophysics in 1990, Duncan Lorimer was inspired to study neutron stars by his undergraduate mentor, Prof. Bernard Schutz. Lorimer got his PhD. in 1994 for his contributions to Pulsar Astronomy from the University of Manchester in the UK under the supervision of Profs. Andrew Lyne, Dick Manchester and Matthew Bailes. Since then he has held positions at the University of Manchester (Lecturer; 1994-5); the Max-Planck-Institute for Radio Astronomy (Postdoctoral Fellow; 1995-8); Cornell University (Postdoctoral Fellow; 1998-2001); University of Manchester (Royal Society Research Fellow; 2001-6) and West Virginia University (Faculty; 2006-present). While at WVU, Prof. Lorimer has served as Associate and Interim Chair in the Department of Physics and Astronomy. Along with his wife and fellow astrophysicist Maura McLaughlin, Lorimer has helped establish the Center for Gravitational Waves and Cosmology at WVU. Prof. Lorimer’s scholarly achievements have been recognized on several occasions: a Cottrell Scholar Award (2008) from the Research Corporation for Scientific Advancement and both the Eberly College of Arts and Sciences and WVU’s recognition for excellence in teaching (2009, 2010) as well as the Benedum Distinguished Scholar Award in the Physical Sciences (2019). Among his notable research achievements are his many contributions to our understanding of the population of pulsars and the discovery of Fast Radio Bursts. Since 1994 Prof. Lorimer has been a Fellow of the Royal Astronomical Society and in 2018 he was elected a Fellow of the American Physical Society. Since January 2019 Prof. Lorimer has served the Eberly College of Arts and Science at WVU in the capacity of Associate Dean for External Research Development.