Norman G Matthew’s death on 15th August, after a long illness, deprived the Society of one of its original and most influential members. His life had many facets. From his early days as a boy soprano in St Paul’s Church, York Place, to his later twin careers of cartographer and astronomer, he encompassed a wider range of activities than most of us aspire to. 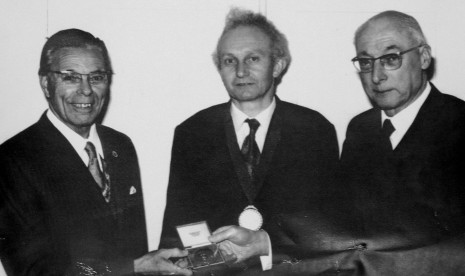 His education at Portobello High School (where his future wife was also a pupil) was followed by an apprenticeship as a cartographer with Bartholemews. On completion of his training he was offered, and accepted, a staff appointment – the youngest-ever cartographer on Bartholemews permanent staff. During the second world war he worked for military intelligence in the War Office – often on top secret projects – producing accurate, detailed maps of the European coastline and elsewhere. These were often needed at short notice, necessitating many hours of long, painstaking work, sometimes far into the night. Such was his ability that the War Office were reluctant to release him when the war was over.

Returning eventually to Edinburgh, he decided to become a freelance cartographer so that he could devote more time to his other interests. For the next 27 years his exceptional skills were always in demand for maps for tourist boards, books and other special requirements.

Norman Matthew was intimately associated with the A.S.E. from its inception in 1924. He was Secretary from 1931 and Observatory Director from 1938, holding both posts until ill health forced him to retire in 1973. He helped to establish much that we now take for granted – monthly and Lorimer lectures, Observatory visits by school and other groups, public access during the Festival and much more besides. Always concerned to promote a wider interest in astronomy, he gave countless lectures to schools throughout the length and breadth of Scotland. For many years he conducted workers’ education and Edinburgh University extra-mural courses at Calton Hill and he was the initiator of the Fellowship of Junior Astronomers (F.J.A.), an informal society for 12 to 13-year olds. Many a young astronomer has had his interest kindled and sustained by Norman Matthew.

As astronomy correspondent of the Scotsman and the Guardian he, not only wrote the monthly star notes but, being the skilled cartographer that he was, also prepared the accompanying charts.

Norman Matthew displayed the same qualities of careful workmanship and attention to detail in his leisure activities (telescope making, woodwork, photography) that he brought to bear in his professional capacities as A.S.E. Secretary, Observatory Director, lecturer and cartographer. A sincere Christian and a thoughtful and kindly man, he will be long remembered by his many friends and acquaintances.

He leaves a widow, a daughter and three granddaughters, to all of whom we offer our most sincere sympathy.