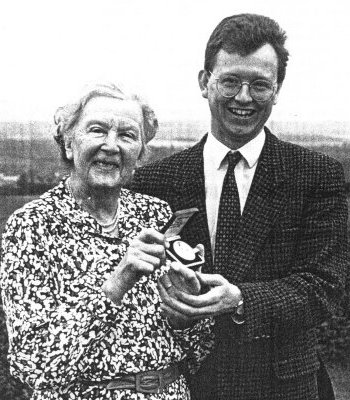 Some of our new members may not be aware of the Lorimer Medal which is awarded by the Society. In the 1930s, when it was known as the Edinburgh Astronomical Association, John Henry Lorimer, a well-known artist and brother of the famous architect Sir Robert Lorimer, was Vice-President. He died in 1936 and left a substantial legacy to the Society: our library at Calton Hill has a bust of Mr Lorimer and two of his paintings. Some of the funds were used to endow a medal in his honour, to be awarded at the discretion of the Council, to persons who have made notable contributions to popular astronomy. It is not awarded often, and not given lightly. The first recipient in 1939 was the famous Cosmologist Sir James Jeans, then over the years it was given to Sir Harold Spencer Jones (Astronomer Royal), Professor W. H. M. Greaves (Astronomer Royal for Scotland), Professor William Smart, Rev Dr Martin Davidson, Rev Dr Hector MacPherson, Patrick Moore, Norman Matthew, and lastly, during our 1984 Diamond Jubilee celebrations, to Harry Ford, formerly Curator of the Mills Observatory in Dundee, who later built a planetarium for Southend and now runs the Caird Planetarium at the Old Royal Observatory at Greenwich.

Recently our Council decided unanimously to award the Lorimer Medal, and with it, Honorary Membership of the Society, to Mrs Nora Jenkinson of Harperdean near Haddington. She developed an interest in astronomy in childhood, and for the last sixteen years her house has seen regular weekly gatherings of local young people, including her own grandchildren, who learn about astronomy, give talks, draw, make models, build instruments and carry out observations. Some of them are now graduates, students and teachers but they still turn up to the “Harperdean Astronomical Society” every Tuesday. In all those years they have failed to meet only six times – stopped only by snowdrifts or other desperate situations. The skies out there are wonderful, and their instrumentation is impressive: a 14-inch Dobsonian reflector in a rotating observatory hut, an 8½-inch reflector built by themselves, mirror and all, and a 4-inch refractor.

On May 4 a Society “delegation” of Dr Reid (President), Dr Rostron, Dr Gavine and Duncan Waldron visited Harperdean to present the Medal to Mrs Jenkinson, in the presence of all her young folk and family. It was a wonderful occasion, ending up with a buffet supper much appreciated especially by the younger generation.