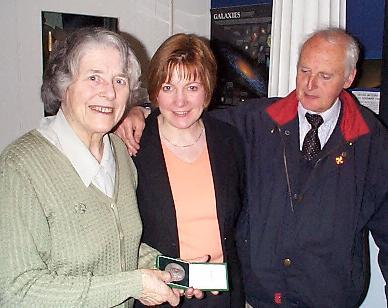 On Friday 4th May 2001 Dr Mary Brück was pleasantly surprised when she was presented with the Lorimer Medal of the Astronomical Society of Edinburgh. This medal is awarded from time to time in memory of our benefactor, John Henry Lorimer RSA, in recognition of meritorious work in diffusing the knowledge of Astronomy among the general public.

Dr Brück had just given the Society a talk on “Mary Evershed and the astronomy of the Divine Comedy”. When our President, Mrs Lorna McCalman, made the presentation.

Dr Brück studied at Dublin before coming to Edinburgh University and gaining her doctorate for research in “Studies of Hα line profiles in prominences” In 1957 she encouraged her husband, the late Professor Hermann Brück, to apply for the post of Astronomer Royal for Scotland. He held this post until his retiral in 1975. The Brücks were the last family of astronomers to live in the official residence at the Royal Observatory on Blackford Hill.

Dr Brück became a part-time lecturer in the University of Edinburgh in 1962 and taught generations of astronomers until her retiral in 1984. She was a University Fellow from 1984 until 1987.

Her research dealt extensively with photographic measurements of colour and brightness of stars and in the newly developing field of photometry. Her knowlege of this field informed her “Exercises in Practical Astronomy using Photographs”.

She took time out of her academic duties to produce, in 1965, the Ladybird book “The Night Sky” and she was kind enough to autograph copies for a number of members of the Society (including the Treasurer and the Secretary) who had enjoyed reading it as youngsters.

In later years she worked with her husband on historical research, in particular “The peripatetic astronomer : the life of Charles Piazzi Smyth”, and has taken a particular interest in the lives of women astronomers such as Agnes Mary Clerke and Mary Somerville.