The Lorimer Medal of our Society is intended for people who, in the opinion of the Council, have contributed greatly to the popularisation of astronomy. It is not often awarded, and is not given lightly. 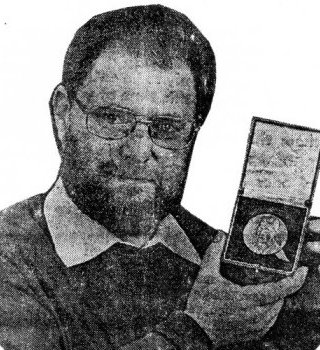 In our 60th Anniversary year, the award was made to Mr Harry Ford at a celebration dinner in the Royal British Hotel on November 28. Among the guests were Mr Ford’s wife Lynne, his mother and other members of the family, and Mrs Matthew. The medal presentation was made by a fellow-Dundonian, Professor Malcolm Longair, Astronomer Royal for Scotland and our Honorary President. The President, Dr Gavine, outlined Mr Ford’s varied career in amateur astronomy, to which Mr Ford replied, thanking the Society and proposing a toast to its future prosperity and success. Professor Longair, in his usual enthusiastic manner, then spoke of Edinburgh’s involvement in the exciting new projects in astronomical research, and praised the dedication and work of the amateurs.

Harry Ford was educated at Rosebank and Rockwell Schools, Dundee, where his science teachers, along with two veteran enthusiasts, Mr Tom Flood and the late John Clark, family friends, encouraged his interests in astronomy. He then entered Queen’s College (now Dundee University) as a medical technician, and developed skills which he soon adapted to astronomical instrument making, but he also gained academic qualifications by part-time study at the Technical and Commercial Colleges. As a regular visitor to the Mills Observatory in Dundee he was often called upon to assist, or deputise for the Curator, Dr Jaroslav Cisar, and on Dr Cisar’s retiral in 1964 Harry succeeded to the post. The Curatorship then became a full-time post, and Harry was able to devote all his energies into making the Mills a major centre of astronomical interest and activity, with a dramatic rise in the numbers of visitors and in the scope of the facilities. Harry was one of the founders of Dundee Astronomical Society in 1956, he has held every office including Chairman, and was recently elected an Honorary Member. He has the uncanny ability of adapting the most unlikely junk to scientific or educational use, he has made countless telescopes (his first 3-inch telescope had a tube made of treacle tins bolted together!), mirrors, cameras, spectroscopes, alidades, sundials, orreries, armillary spheres and space exploration models, many of which are displayed at the Mills. It was always his policy to make simple astronomical ‘toys’ like direct-vision spectroscopes to give away to aspiring youngsters, some of whom later became professional astronomers and physicists, like his cousin Dr Bill Allan, Dr Neill Reid and George Spalding. He has taken part over the years in many observing programmes, sun, comets, planets, meteors, but excelled at lunar work with the 10-inch Cooke refractor of the Mills. An active member of the BAA, he was for a time Director of the Lunar Section and led a talented group, which included Morgan Findlay and Dave Taylor, on occultations, crater profile studies and investigations into Transient Lunar Phenomena. Sadly, the team soon disbanded as its members were forced to leave the neighbourhood for various reasons, mainly in search of work. However, one dedicated supporter remained, his old mentor Tom Flood, who became his Assistant Curator. Harry has also been an observer of aurora and noctilucent clouds since the International Geophysical Year of 1957-58, and some of his fine aurora photographs are among our displays at Calton Hill.

In the early days he made a small planetarium projector to operate in a dark alcove in the observatory, in the usual Ford manner – a big perforated cistern ball turning on an old bike axle with Meccano gearing. Then he built a more sophisticated model inside a small room, which although on a modest scale, was actually Scotland’s only fully public planetarium for a number of years. In 1982 Harry decided for family reasons to move to Southend and to a new venture, running his own planetarium in a room in the town museum as a small business. The fine projector and big fibreglass dome took him many months of labour, assisted by Lynne’s artistic talents, but it was completed and the visitors and school parties are entertained to a superb show. The projection devices are simple but ingenious. Harry is now very much a part of the Essex ‘scene’, often in demand for lectures, demonstrations and model building. He has other interests, naturally, among which are Scottish history and the history of science and technology. He has had several articles on these themes published recently in the Scots Magazine.

In a most enthusiastic promoter of astronomy, an active observer and an ingenious craftsman, the Society has a worthy Medallist in Harry Ford. We now look forward to his next visit to Calton Hill, to deliver the Lorimer Lecture to the Society.