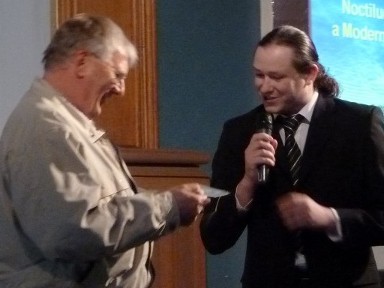 Alan Pickup (left) with David Small (President) during the award of the Lorimer medal.

Alan Pickup is actively involved in the Society, serving on the Council and presenting a monthly sky preview at Society meetings. He writes regularly for newspapers like the Scotsman, The Guardian and the Sunday Times since the mid 1970s.

In his professional career, Alan worked for the Royal Observatory Edinburgh (ROE) and the UK Infrared Telescope in Hawaii on telescope instrumentation. Along this work, he has become an authority on satellite orbit decay. He continues to work part-time for the ROE Visitor Centre.