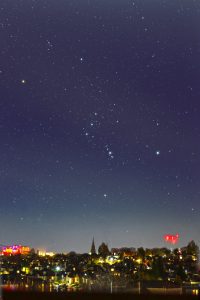 Every year Orion features prominently in our notes for January, and this is no exception. Rising in the east as darkness falls as the month begins, it stands clear of the horizon in the east-south-east by 19:00. Look for it in the south-east at our map times, with the three almost equal stars of Orion’s Belt slanting down towards our brightest nighttime star, Sirius in Canis Major. 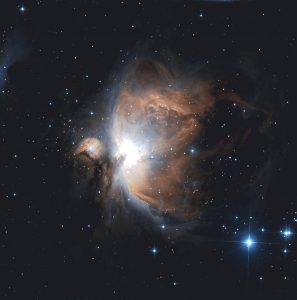 A favourite for amateur stargazers and astrophotographers is the Orion Nebula, found in the Sword of Orion that hangs below the Belt. Visible to the naked eye, but a memorable sight through binoculars or a telescope, we are seeing the glowing fog of gas and dust that makes up a stellar nursery some 1,350 light years away – our closest region of massive star formation.

I’ve been known to describe Orion and Sirius as dominating our January evenings, but this month they have competition from the three conspicuous planets Venus, Jupiter and Mars.

Let’s begin with the latter, Mars, which reached opposition on December 8 when it stood directly opposite the Sun in the sky. Purely by coincidence, Mars was hidden (occulted) at the same time by the full Moon in an event that was widely observed across Scotland despite its occurrence at an unsocial predawn hour.

Mars lies above and to the right of Orion where it is retrograding (moving westwards) above Aldebaran in Taurus. Although it is edging towards the Pleiades star cluster, it slows to a halt at a so-called stationary point on the 12th before reverting to its more usual prograde (easterly) motion.

This month sees Mars more than halve in brightness from magnitude -1.2 to -0.3 as its distance grows from 96 million to 131 million km and a telescope shows the apparent diameter of its rusty disk contracting from 15 to 11 arcseconds.

Compare Mars’ reddish hue, the product of iron oxide (rust) in its surface soils, with those of the red giant Aldebaran nearby, the red supergiant Betelgeuse in Orion’s shoulder and the white star Sirius. One obvious difference is that Mars, like most planets for most of the time, does not twinkle, while the stars do, especially when, like Sirius, they stand lower in the sky and their light is disturbed by having to travel through more of the Earth’s atmosphere before it meets our eyes.

Betelgeuse, you may remember, was the object of much speculation three years ago when its brightness plummeted by around a factor of three – was it about to expire in a supernova explosion? It now appears that it had ejected a cloud of obscuring dust that has now dissipated. Indeed, it now shines near magnitude 0.3, close to its maximum brightness when it rivals Orion’s usually-brightest star, the contrasting blue supergiant Rigel.

Jupiter outshines every star though it dims a little from magnitude -2.4 to -2.2 this month. Seen against the stars of Pisces, to the south of the Square of Pegasus, it passes around 33° high in the south as darkness falls for Edinburgh at present but sinks to 20° in the south-west by our map times and sets due west less than three hours later. Almost any telescope shows its four main moons and its cloud-banded disk, 37 arcseconds wide at mid-month.

Venus is brighter still at magnitude -3.9, but easy to miss unless we have a clear view low into the south-west. Its altitude one hour after sunset improves from 2° on the 1st to 9° on the 31st, by which day it sets for Edinburgh at 19:01.

As Venus emerges from the twilight, it passes the much fainter (magnitude 0.8) Saturn which is disappearing from view in the other direction. The ringed world lies some 15° high in the south-west at nightfall at present, but sinks to sit only 0.4° above Venus on the 22nd. On the 23rd, Venus lies 1° left of Saturn and 5° to the right of the slender young Moon, only 5% sunlit and brightly earthlit.

Mercury rounds the Sun’s near side on the 7th and hugs our south-eastern horizon just before dawn later in the month.

The Quadrantids meteor shower began around December 28 and has a sharp peak at around midnight on the 3rd/4th when 80 or more meteors per hour might have been seen under the darkest skies. Sadly, the bright Moon lies near Mars at the time and swamps all but the brighter meteors. They diverge from a radiant point that lies below and left of the Handle of the Plough as it climbs high into our north-east during the night. 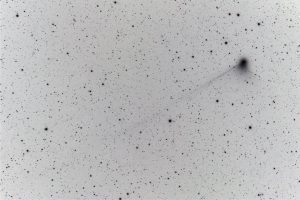 Our north map plots the radiant and also the path of Comet ZTF as it climbs up between the Plough and Polaris, the Pole Star. With the official name of Comet C/2022 E3 (ZTF), it was discovered in March by the camera of the Zwicky Transient Facility, hence its name.

Only a small comet, it reaches perihelion 166 million km from the Sun on the 12th and will be closest to the Earth (42 million km) on February 1 before departing never to be seen again. A telescopic object as I write, it may just become visible to the unaided eye around the day it sweeps past the second magnitude star Kochab (K on our chart) on the 27th. Perhaps binoculars will reveal it more easily as a fuzzy blob with a tail stretching to the right.

This is an extended version, with added diary, of Alan’s article published in The Scotsman on 31 December 2022, with thanks to the newspaper for permission to republish here.