Mars slips behind Moon at its hour of opposition on 8th

December brings the much-anticipated opposition of Mars, with the Red Planet standing above the glorious constellation of Orion and higher in our midnight sky than it has since 2008. Jupiter is even more conspicuous in our southern evening sky where it lies near the Moon on the 1st and 2nd, while the middle of the month is enlivened by the reliable and prolific Geminids meteor shower.

As it did last month, though, it is Mars which claims our attention. It reaches opposition, directly opposite the Sun in the sky, on the 8th, at the same time that it is hidden behind the full Moon during Scotland’s only occultation of a bright planet this year. 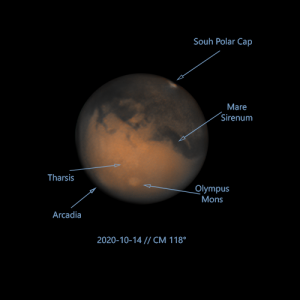 Mars in October 2020 taken by Mark Phillips from Edinburgh

Look for Mars shining reddish and low in the north-east as darkness falls, and watch it climb through the east to sail nearly 60° above Edinburgh’s southern horizon in the middle of the night before sinking towards the north-west by dawn. It lies between the horns of Taurus the Bull as the month opens, but tracks 10° westwards to pass about 8° north of Aldebaran, the brightest star in Taurus, as we approach New Year. Aldebaran, a red giant star at a distance of 65 light years, lies in our line-of-sight to the V-formation Hyades star cluster, 153 light years away. The more iconic Pleiades cluster, the Seven Sisters, sits at some 444 light years and twinkles 9° to the west (right) of Mars by year’s end.

Mars is actually closest to Earth, 81 million km, on the 1st and at its brightest, magnitude -1.9, on the 6th, surpassing the brightest star Sirius which clears our south-eastern horizon soon after our star map times. By Hogmanay, Mars has halved in brightness to magnitude -1.2 and receded to 95 million km. Meanwhile, telescopes show its small disk shrinking in diameter from 17 to 15 arcseconds.

The occultation of Mars occurs on the morning of the 8th, with Mars 30° high in the west when it slides behind the upper-left edge of the Moon at 04:54 GMT. Exactly one hour later it emerges from the lower-right edge of the Moon. Times for elsewhere in Scotland may differ slightly. Use binoculars or a telescope to view the occultation – the Moon’s glare will make it a hard watch with the unaided eye.

We certainly need a telescope to view the lunar occultation of Uranus during Edinburgh’s evening twilight on the 5th. Between 16:58 and 17:22, the distant planet dips behind the northern edge of the Moon. In a darker sky, the planet is visible as a magnitude 5.6 binocular object in Aries, about 15° south-west of the Pleiades. 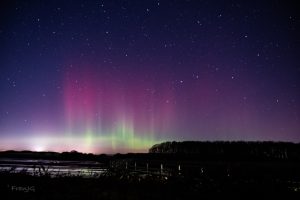 Aurora taken by Fran Goodman from East Lothian on 28 Nov. Aurorae are caused by the solar wind interacting with the Earth’s atmosphere.

Our charts show Taurus and Mars above Orion and climbing in our eastern sky. To their left lies Gemini and its two main stars, Pollux and Castor, while close to the latter is the radiant point for the annual Geminids meteor shower. This produces slow meteors between the 4th to the 17th with the highest numbers expected on the morning of the 14th.

Geminid meteors appear in all parts of the sky but our perspective means that their paths appear to diverge from this radiant point. Under ideal conditions, some 100 meteors per hour might have been counted near maximum, though the light of the 70% gibbous Moon, not far away in Leo, will hide some of these this year.

While most meteor shower originate from comets, the parent of the Geminids is the asteroid Phaethon whose orbit carries it within 20 million km of the Sun, closer than any other named asteroid. It is thought that the heat stress of these encounters causes its surface rocks to splinter and feed the stream of particles that we see as Geminids.

The ”W” of stars forming Cassiopeia lies above our heads at the map times while the three main stars of Andromeda, Almach, Mirach and Alpheratz, lie to its south and lead down through the south-west to join up with the Square of Pegasus. Altair in Aquila, the southernmost star of the Summer Triangle that it forms with Deneb and Vega, is about to set in the west as Ursa Major and the Plough begins to climb into the north-east. Capella in Auriga twinkles higher in the east, above Gemini, on its way to pass overhead as Mars and Orion culminate around midnight.

Although Saturn, a respectable magnitude 0.8 in Capricornus, is setting in the west-south-west by the map times, it stands almost 20° high in the south as darkness falls at present. Catch it below the 15% crescent Moon on Boxing Day.

Earlier in the evening, the Square of Pegasus stands due south above Jupiter which this month fades slightly from magnitude -2.6 to -2.4 as its disk shrinks from 43 to 39 arcseconds. The Moon encounters Jupiter a second time before the month’s end and lies 4° east of the planet on the evening of the 29th. By then, Jupiter sets in the west before midnight.

The inner planets, Mercury and Venus, emerge from the Sun’s glare to stand low in our evening twilight later in the month, though only for those of us with an unobstructed south-western horizon. Forty minutes after sunset on the Christmas Day, Venus is brilliant at magnitude -3.9 but only 2° high while Mercury, much dimmer at magnitude 0.2, is 4° above-left of Venus, with the slender young Moon a further 13° to the left. Mercury stands 1.6° above Venus on the 28th, with the latter in line to be a conspicuous evening star until next summer.

This is an extended version, with added diary, of Alan’s article published in The Scotsman on 30 November 2022, with thanks to the newspaper for permission to republish here.