Our mid-evening sky has all five of the outer planets, those further from the Sun than the Earth, standing in line from the south-west to the east. Jupiter, in the south below the four stars of the Square of Pegasus at our map times, is the brightest but Mars is an increasingly conspicuous object in Taurus the Bull in the east. 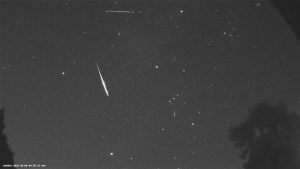 Mars rises in the north-east three hours before our map times and climbs steadily through the east and south-east to stand high in the south, and directly above the glorious constellation of Orion, in the early hours of the morning. The planet brightens from magnitude -1.3 to -1.8 during the month to outshine the brightest star, Sirius, which blazes below and to the left of Orion. The two, though, appear very different to our eyes – Sirius is a furiously-twinkling white star which contrasts with Mars whose steady reddish light lies to the right of the Moon on the evening of the 11th.

Mars spends November accelerating westwards between the bull’s horns. Its usual eastwards motion against the star background slowed to an apparent halt at a stationary point on October 30 and for the next few weeks we see it back-tracking westwards – a consequence of our changing view as we “undertake” it on the swifter-moving Earth. On December 8, Mars reaches opposition when it is directly opposite the Sun in the sky so that it rises at sunset, stands due south in the middle of the night and sets at sunrise. 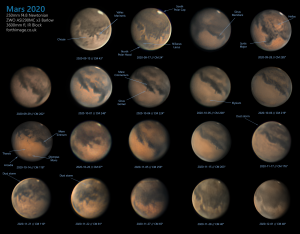 Opposition is often when a planet is closest and brightest, but this time Mars it is actually closest to us in the early hours of December 1. This occurs because both Earth and Mars trace slightly eccentric orbits, and Mars is moving outwards towards its farthest point from the Sun, its aphelion, while the Earth is tracking inwards towards perihelion, its nearest point to the Sun which, perhaps surprisingly, we reach in early January. The relative motions ensure than Mars is closest a full week before the moment of opposition.

This also means that Mars-observers have as good a view during November as we can expect during December. Viewed telescopically, its disk swells in apparent diameter from 15 to 17 arcseconds as it approaches from 93 million to 81 million km. Although its ochre globe appears disappointingly small during this opposition, we will need to wait until 2033 to see it any closer and larger.

Not far from Taurus, and 14° south-west of the familiar Pleiades star cluster, is Uranus which comes to its own opposition (and closest point) on the 9th at a range of 2,796 million km. Just visible to the naked eye at magnitude 5.6, it is easier to identify through binoculars if you can find a better finder-chart on the Web. Its blue-green disk appears 3.8 arcseconds wide through a telescope.

Our star maps show the Plough in its customary autumnal place below the Polaris, the Pole Star, in the north as the five main stars of Cassiopeia form a “W” or “M” overhead. Orion is just rising in the east and the Milky Way is arching overhead from the east, through Cassiopeia and westwards through the Summer Triangle formed by Vega, Deneb and Altair. That Triangle, though, still dominates our high southern sky at nightfall.

Catch Saturn 6° below the Moon in our lower southern sky at nightfall on the 1st and watch it sink lower into the south-west where it sets some two hours after our star map times. The planet dims a shade from magnitude 0.6 to 0.8 and is passed by the Moon for a second in the month, standing above-left of the Moon on the 28th and to its right on the 29th.

Jupiter is conspicuous in the south-east as the night begins and passes 32° high in the south soon after our map times. Also fading a little from magnitude -2.8 to -2.6, its cloud-banded disk spans 46 arcseconds if viewed telescopically at mid-month, almost three times as wide as Mars. Even with binoculars, we see it as more than a point of light and, if we can hold them steadily enough, we might even glimpse one or more of its four main moons. Currently creeping westwards in Pisces, Jupiter slows to a halt at a stationary point on 24th when its motion reverses to easterly. Look for it just above the gibbous Moon on the 4th. 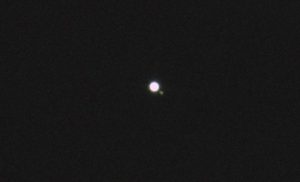 The farthest planet, Neptune, is a dim binocular object of magnitude 7.8 about 6° south-west of Jupiter. Our chart shows it south of the loop of fainter stars, the Circlet, that represents one of the pair of fish in Pisces.

Mercury and Venus are out of our sight this month. The former reaches its superior conjunction, directly behind the Sun, on the 8th while Venus hugs Scotland’s south-western horizon at sunset.

The peak of the annual Leonids shower of very swift meteors is due at about midnight on the 17th-18th as Leo rises clear of our east-north-eastern horizon. The meteors diverge from a radiant point within the Sickle of Leo, the reversed question-mark of stars that curls above Leo’s brightest star, Regulus. The Sickle climbs high into the south by dawn but meteor rates are predicted to be low this year, while the light of the crescent Moon, also in Leo on that night, will hinder meteor observing.

This is an extended version, with added diary, of Alan’s article published in The Scotsman on 31 October 2022, with thanks to the newspaper for permission to republish here.