Sun eclipsed on 25th as Mars and Jupiter dominate nights

Mars and Jupiter are striking nighttime objects for October, but our highlight is an eclipse of the Sun on the morning of the 25th. Saturn is also on show for the first part of the night and early risers have their best chance this year of spotting Mercury before dawn.

The Summer Triangle, formed by the bright stars Vega, Deneb and Altair, still fills our high southern sky as the night begins, but has moved into the west by our map times.

The constellation of Cygnus represents a swan flying southwards along the Milky Way with Deneb marking its tail, wings outstretched, and the famous double star Albireo at its beak. As Cygnus topples westwards, it becomes easier to see it as a cross, the Northern Cross, planted upright in the sky with Deneb at its head. Its counterpart, Crux the Southern Cross, is too far south to be seen from Europe and is much more compact, being only a quarter as tall and the smallest of the sky’s 88 constellations.

The Moon reaches first quarter on the 3rd and is full as the Hunters’ Moon on the 9th. Last quarter arrives on the 17th and the Moon is new during the partial eclipse of the Sun on the 25th. 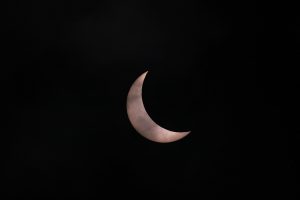 Partial solar eclipse as seen from Edinburgh in 2015 (Mark Phillips)

For Edinburgh, the eclipse begins at 10:03 BST when the Sun stands 13° above the south-eastern horizon and the black disk of the Moon begins to bite into its upper limb. The Moon hides the upper-left 31% of the Sun’s diameter at mid-eclipse at 10:55 and exits the left edge of the disk at 11:49 when the eclipse ends with the Sun 20° high in the south-south-east.

I am bound to warn again of the serious danger of viewing the Sun directly at any time through binoculars, a telescope or even with the naked eye. To do so invites permanent eye damage. Instead, we may project the Sun’s image onto a white card using binoculars or a small telescope, or use so-called eclipse glasses or a properly certified solar filter.

The times for elsewhere in Britain vary slightly from those for Edinburgh. For London, the Moon hides up to 26% of the Sun’s diameter and the event lasts from 10:08 until 11:51. Watchers in Lerwick see up to 40% obscured between 10:00 and 11:56. The deepest eclipse is visible from central Siberia where 86% is hidden.

This is probably our best solar eclipse until 2036. Edinburgh is due four others in the meantime, but all occur with the Sun poorly placed as it rises or sets. 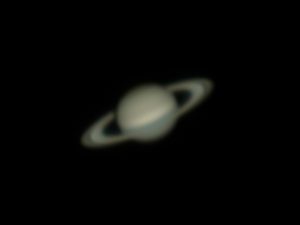 Saturn moves from the south-south-east at nightfall to pass 18° high across Edinburgh’s meridian one hour before our map times and then sink to the west-south-west horizon in the early hours. Shining at magnitude 0.5 to 0.6, it is officially stationary on the 23rd when its slow westerly motion reverses to easterly against the stars of Capricornus. Always a superb sight telescopically, its disk is 18 arcseconds wide in mid-October, while the rings span 40 arcseconds and have the north face inclined at 15° towards us.

The gibbous Moon lies below-left of Saturn on the 5th and even closer to Jupiter on the 8th. Although the latter dims slightly from magnitude -2.9 to -2.8 this month, it outshines every other object in our night sky, bar the Moon, as it blazes in our eastern sky at nightfall and reaches 34° in altitude when due south less than two hours after our map times. Through a telescope, it appears 49 arcseconds wide at midmonth. Meantime Neptune, only 2 arcseconds across and visible through binoculars at magnitude 7.8, lies 8° below and right of Jupiter.

Mars rises in the north-east just under two hours before our map times and is a conspicuous object between the horns of Taurus the Bull as it climbs through our eastern and south-eastern sky to soar 57° high and due south for Edinburgh at about 05:00 in mid-October. By those predawn hours, it stands directly above the memorable constellation of Orion and close to its position when it will be closest at opposition on December 8. 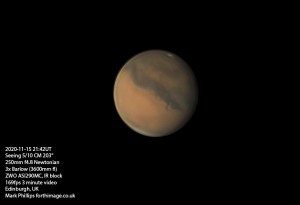 Mars brightens from magnitude -0.6 to -1.2 and tracks 6° eastwards to the left of Taurus’ leading star, the similarly-hued orange supergiant star Aldebaran. Its easterly motion slows and reverses at a stationary point on the 30th. While outstanding to the naked eye, Mars presents a small disk telescopically, its diameter swelling from 12 to 15 arcseconds this month as its distance shrinks from 117 million to 93 million km. Catch the Red Planet 3.5° below the Moon in the late evening of the 14th.

Mars happens to lie just a few degrees above and right of the radiant point of the Orionids meteor shower. Caused by particles released by Comet Halley, the shower peaks on the night of the 21st-22nd with perhaps 20 swift meteors per hour visible to an observer under ideal conditions. While they flare in all parts of the sky, their paths point back to the radiant. No Orionids are seen, though, until this point rises at about our map times.

While Venus is beyond the Sun and not visible, the innermost planet, Mercury, is starting its best morning apparition of the year. Between the 2nd and the 22nd, it rises more than 80 minutes before the Sun and climbs to stand up to 10° high in the east 40 minutes before sunrise. It brightens from magnitude 0.9 on the 2nd, to -0.4 on the 8th when it stands furthest (18°) from the Sun, and improves to magnitude -1.0 before it drops back into the brighter twilight. We might still glimpse it 4° below-left of the 2% illuminated crescent Moon just before dawn on the 24th.

Times are BST until 30th

This is an extended version, with added diary, of Alan’s article published in The Scotsman on 30 September 2022, with thanks to the newspaper for permission to republish here.

The Astronomical Society of Edinburgh will be live streaming the partial solar eclipse on YouTube using the historic 6-inch Cooke telescope on Calton Hill, weather permitting.