Saturn and Jupiter return to midnight sky as twilight abates

July sees Scotland’s night-long twilight abate enough for the fainter stars and the Milky Way to become visible later in the month, at least for observers under dark skies. We also welcome the return of the two giant planets, Saturn and Jupiter, to our monthly star maps.

The most noteworthy astronomical event, though, may be the scheduled release on the 12th of the first full colour images and spectroscopic data from the James Webb Space Telescope. There was concern when one of Webb’s 18 mirrors was struck by a meteoroid around 24 May, though the damage is said to be barely noticeable and the telescope is still performing beyond its design requirements.

Some of Webb’s instrument modes remain to be fully commissioned, but others have been declared as ready for science. More than 266 research programmes have already been selected for its first year, hoping to answer questions about everything from objects in our Solar System, to stars, exoplanets, galaxies, black holes and the large-scale structure of the universe. 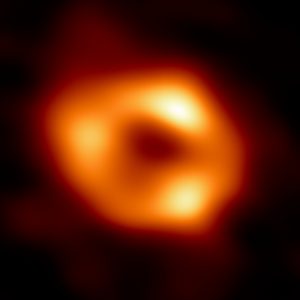 By EHT Collaboration, CC BY 4.0

One target of several programmes is the supermassive black hole which sits some 26,000 light years away at the centre of our Milky Way galaxy. The first image of this object, dubbed Sagittarius A*, was published on 12 May and obtained by the Event Horizon Telescope, the same global network of radio telescopes that released an image of the black hole at the core of the galaxy M87 three years ago.

Even with its mass of some 4 million Suns, the Sagittarius A* black hole is dwarfed by the one in M87 which may be perhaps 1,500 times more massive. Both images appear similar, though, and show the shadow of their respective black holes surrounded by bright emission from material spiraling inwards at a large fraction of the speed of light.

We now think that most large galaxies have supermassive black holes at their centres, but smaller black holes are formed elsewhere in galaxies, left behind when giant stars reach the end of their lives and explode as supernovae. Emitting no light, these black holes are detected only indirectly, usually because they form part of a binary system with a normal star.

For the first time, however, two separate teams of astronomers claim to have discovered a lone black hole “free-floating” in interstellar space. Over a six-years period, they watched a distant star as it appeared to change in brightness and position in a way they explain as a lensing effect caused by the gravitational force of an intervening black hole. Observers using the Hubble Space Telescope estimate that the latter lies some 5,000 light years away, is seven Suns in mass and is travelling at some 45 km per second across the line-of-sight to the star.

It so happens that this interstellar black hole, one of possibly 200 million in the Milky Way, lies only 1.5° or three Moon-breadths from the direction of Sagittarius A* and the Galactic Centre. The latter is plotted as “Gal C” just above the southern horizon at our map times although, because of obscuring interstellar dust, don’t expect to see anything of it visually at this position.

With the Sun turning southwards, the sunrise/sunset times for Edinburgh change from 04:31/22:01 BST on the 1st to 05:15/21:22 on the 31st when it passes 16° below our northern horizon in the middle of the night – still not quite enough for our night sky to be completely twilight-free. As a result, July brings more chances to spot those electric-blue noctilucent or night-shining clouds I mentioned last time.

Our charts have the Plough in the north-west as Cassiopeia climbs in the north-east. The Milky Way arches high across our eastern sky, from Auriga in the north, through Cassiopeia and Cepheus to Cygnus and its leader Deneb high in the south-east. Deneb marks the top-left corner of our Summer Triangle whose other apexes are occupied by Lyra’s Vega, conspicuous and almost overhead, and Altair halfway up in the south. The Milky Way flows down though the Triangle towards Sagittarius and the Galactic Centre.

Brighter than Altair, but only 8° high in the south-east at our map times, is the planet Saturn which improves from magnitude 0.6 to 0.3 as it creeps westwards against the stars of eastern Capricornus. In fact, it rises in the east-south-east more than one hour earlier and climbs to stand almost 20° high in the south just before dawn, higher than it has been for 8 years. Look for it above the bright Moon on the 15th-16th when a telescope shows it to be 18 arcseconds wide, set within 42 arcseconds rings whose north face tips 14° towards us.

Jupiter, brightening from magnitude -2.5 to -2.7 in the constellation Cetus, rises in the east at our map times and is conspicuous more than 20° high in the south-east before dawn. Its turn to lie just above the Moon comes on the 18th-19th. The planet’s cloud-banded disk swells from 41 to 45 arcseconds in width and, along with its four main moons, is always interesting to view in a small telescope.

Mars brightens from magnitude 0.5 to 0.2 and lies 20° below-left of Jupiter on the 1st, tracking the same distance further away during July. It is near the Moon on the 21st and 22nd, but is a disappointing 8 arcseconds wide through a telescope.

Our final morning planet is also by far the brightest at magnitude -3.9. Venus, which rises in the north-east for Edinburgh at 02:49 on the 1st and by 03:10 on the 31st, stands 12° to 14° above the east-north-eastern horizon at sunrise. Telescopes show its dazzling gibbous disk to be about 11 arcseconds wide. Catch it below the slim (6% sunlit) waning Moon before dawn on the 26th. Mercury reaches superior conjunction on the Sun’s far side on the 16th.

This is an extended version, with added diary, of Alan’s article published in The Scotsman on 30 June 2022, with thanks to the newspaper for permission to republish here.