Emily Ladkawalla joined us from the West Coast of America to talk about the development of our exploration of Mars. Having highlighted her early passion for geology and space and her involvement in communicating scientific progress and ideas as an early adopter of ‘Blogs’, she went on to review the progress made in our understanding of the conditions and geology of the planet. 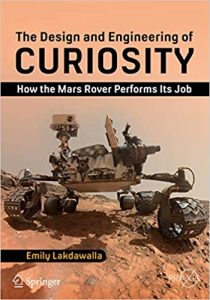 You can buy Emily’s book: “The Design and Engineering of Curiosity: How the Mars Rover Performs Its Job”

Progressing through the missions she highlighted the instrumentation used for the missions and what they revealed about the geology and climate of Mars, from the orbital surveys through to the ever more sophisticated rovers. Through the exceptional images shown she covered the dominant features of the landscape down to the fine particles of dust identified in the later missions. We were able to see the impact of water on the landscape and what this had done to the chemistry of the rocks. The talk demonstrated what a skilled communicator Emily was and if you missed the original broadcast you really should see it on our YouTube channel.

We were left to appreciate the complexity of the current mission with its aim to return samples of rocks and dust to earth relying on a well coordinated series of activities across agencies and countries.