Totally eclipsed Moon to set at sunrise on the 16th

Scotland’s nights are growing shorter and increasingly twilit to the extent that the first few nights of May are the darkest we will enjoy until well into August. Not that they offer much to savour in the shape of planets – all the bright ones are visible, and there are some notable conjunctions, but only if we can see low down in the evening or morning twilight.

The month’s highlight is the total eclipse of the Moon on the 16th, the first of two this year and the only one to be visible in part from the UK. We need to rise early (or stay up late) to catch it, though, for it occurs as the Moon is sinking towards our south-western horizon during the pre-dawn twilight. 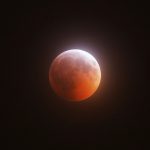 The eclipse begins at 02:32 BST with the Moon in the middle of the constellation Libra and 12° high in the south-south-west as seen from Edinburgh. It is then that the lunar disk touches the penumbra of the Earth’s shadow in space. Little darkening of the Moon may be noticed for more than thirty minutes, but at 03:28 the Moon encounters the more obvious border of the dark central umbra of the shadow where direct sunlight is extinguished. Between then and 04:29, the Moon draws fully into the umbra as it sinks from 8° to only 3° high and may become hard to follow in the brightening twilight in the south-west.

The total phase, with the Moon fully in the umbra, lasts from 04:29 to 05:54 although moonset for Edinburgh comes at 05:02, before mid-eclipse and just after sunrise on the opposite side of the sky. Parts of Africa and much of N and S America have a better/longer/higher view and see the Moon leave the last of the umbra and penumbra at 06:55 and 07:50 BST respectively.

Mercury begins the month in the final days of its best evening appearance of 2022 and stands 3° to the right of the very slender (4% sunlit) young Moon on the 2nd. Use binoculars to glimpse them low in the west-north-west as the twilight fades – they stand 10° high forty minutes after sunset and set themselves another 100 minutes later. Those binoculars should reveal the familiar stars of the Pleiades cluster less than 3° to Mercury’s right. Fading rather quickly, the innermost planet is magnitude 0.8 on the 2nd and a full magnitude fainter and 2° lower by the 7th as it draws towards the near side of the Sun and inferior conjunction on the 21st.

Our charts for later in the night show the Plough tumbling westwards from the zenith as Arcturus in Bootes shines brightly in the middle of our southern sky and Leo sinks lower the west. The many galaxies around Leo and Virgo, mentioned last time in connection with our galaxy season, are still on show at nightfall, but the coming moonlight and summer twilight draw the curtain on galaxy-hunting for now.

While the Virgo cluster galaxies lie around 54 million light years away, they are near neighbours as compared with the farthest one ever sighted. The dim light of the remote galaxy HD1 apparently took 13.5 billion years to reach us after being emitted only 330 million years after the Big Bang. Allowing for the expansion of the universe in the meantime, in the present-day whatever remains of HD1 lies some 33.4 billion light years away in the constellation of Sextans, 9° to the south of Regulus in Leo.

The report in early-April of HD1’s discovery came just days after it was announced that researchers using Hubble have found the farthest individual star ever to be seen. Dubbed Earendel, its light travelled for 12.9 billion years and we see it only because the gravitational lensing caused by an intervening cluster of galaxies has magnified it more than a thousandfold. Expect HD1 and Earendel to be targets of the James Webb Telescope, on track to begin its scientific studies any month now.

The remaining naked-eye planets are predawn objects, very low down between the east and south-east and currently more than 40° to the right of the sunrise position. Keep in mind, though, that it is never safe to scan for them using binoculars after the Sun has risen. Venus has been a morning star since January but rises less than one hour before the Sun and, while brilliant at magnitude -4.1, it is only 6° high in the east at sunrise. Jupiter, one sixth as bright at magnitude -2.1, lies less than a Moon’s breath above-right of Venus on the 1st and should be obvious through binoculars.

Mars, much fainter still at magnitude 0.9 and more of a challenge to spot in the twilight, lies 16° right of Venus on the 1st and 2° higher in the sky, while Saturn is similar in brightness, another 18° to the right and 2° higher. Venus, Mars and Saturn spread further apart over the month while Jupiter pulls away from Venus and passes 0.6° above Mars on the 29th. At 04:00 BST on the 25th, 44 minutes before sunrise, Jupiter lies 6° high and 2.5° to the left of Mars, with the waning 26% crescent Moon directly below.

The Eta-Aquarids meteor shower is the fourth most active one of the year but poorly seen from the UK. Its radiant point, the place in the sky from which its meteors diverge, sits low in the east-south-east before dawn and only 8° or so above the line made by our morning planets this month. The shower peaks on the 6th and lasts for most of the month, producing fast meteors, many of which leave glowing trains in their wake. Like the Orionids meteor shower of October, its meteoroids comprise debris from Comet Halley.

This is an extended version, with added diary, of Alan’s article published in The Scotsman on 30 April 2022, with thanks to the newspaper for permission to republish here.