Open season for galaxies as Mercury well placed in evening

If March was a dud for planet-observing from Scotland’s latitudes, April is redeemed only by the fact that Mercury becomes as well placed in our evening sky as we are ever likely to see. The other bright planets are all twilight-bound before dawn and we can probably forget them unless we have nothing to block our view of the horizon to the east and south-east, or unless we travel to more southerly latitudes.

Recent months have seen our southern evening sky dominated by Orion and his entourage of winter constellations. The area is rich in bright stars and contains a plethora of star clusters, ranging from the Pleiades in Taurus to Orion’s right to others near the limit of naked-eye visibility and higher in the sky in Auriga and Gemini.

Orion’s Sword, hanging below his Belt, has the famous Orion Nebula, that glowing hazy patch which is the birthplace of new stars and has itself a star cluster at its core. Largely unseen to the human eye, but extending across much of the region, are extensive clouds of gas and dust that lie along the arms of our Milky Way galaxy and hide the light of the more distant stars and even more remote galaxies.

Orion is in view in the south-west as darkness falls in early April, but as it sets in the west at our star map times it takes those interstellar clouds with it. We are left with unobscured views towards the constellations Leo and Virgo, now on show in our southern evening sky, and regions northwards into Ursa Major and the Plough which looms overhead at our map times.

Indeed, such is the wealth of galaxies visible across this expanse that astronomers refer to the weeks around now as “galaxy season” though, in truth, even the brighter ones require our use of a telescope. The season peters out in May as night-long twilight descends over Scotland, so we need to be quick.

The greatest density of galaxies resides some 10° east (left) of Denebola, the tail star of Leo, and comprise the Virgo Cluster. Here more than 1,300 galaxies lie around 54 million light years away and anchor an enormous supercluster of galaxies that sprawls northwards into Coma Berenices and reaches towards us to take in the Local Group of galaxies to which the Milky Way belongs. 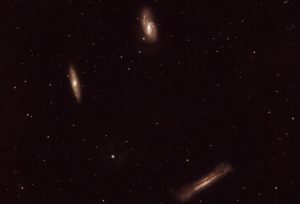 It needs a better chart than the one here to pin-point most of these galaxies, but three that are worth the effort lie below the hind-quarters of Leo and make up the Triplet of Leo. The brightest, found by Charles Messier and called Messier 66 (or M66), lies exactly halfway between the stars Chertan and Iota (see map) and appears as a mottled oval smudge through a telescope. At magnitude 8.9 and 35 million light years away, it is brighter than any of the Virgo galaxies and just outshines its near neighbour, M65, only 20 arcminutes away to its west.

Both are spiral galaxies tilted to our view, while NGC 3628, 0.6° north of M66, is another spiral though one seen edge-on so that the dark dust in its spiral arms slices it into two and has led to it being called the Hamburger. Its other name, Sarah’s Galaxy, is regarded as a tribute to Sarah Williams, the 19th Century English poet whose most famous poem, “The Old Astronomer”, contains the celebrated lines

Though my soul may set in darkness, it will rise in perfect light;
I have loved the stars too truly to be fearful of the night.

It is from this that Ian Rankin chose “Set in Darkness” as the title of his 11th Rebus novel. 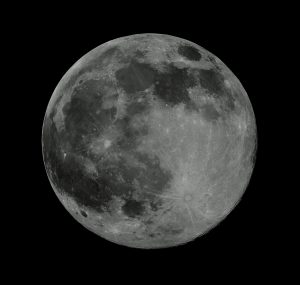 The Sun’s continuing northwards motion causes Edinburgh’s sunrise/sunset times to change from 06:44/19:51 BST on the 1st to 05:32/20:50 on the 30th. The Moon is new on the 1st, at first quarter on the 9th, full on the 16th, at last quarter on the 23rd and new again on the 30th when a partial solar eclipse is seen from the south-eastern Pacific and southern South America.

A clear western horizon after sunset on the 2nd gives us the spectacular sight of the very slender Moon, only 3% sunlit but with bright earthshine. The earthshine fades over successive evenings, but not before the Moon has climbed to stand 6° below the Pleiades on the 4th.

Mercury swings around the Sun’s far side at superior conjunction on the 3rd and stands low in our west-north-western evening sky during the latter half of April. Indeed, if we’ve never seen Mercury before, this is our chance. Its altitude one hour after sunset improves from 5° on the 17th to almost 9° during the final week of April. While it fades fourfold from magnitude -1.0 to 0.5 during this period, we should see it easily with the unaided eye, though binoculars may help to pick it up in the twilight. Its motion carries it from 6° below-right of the Pleiades on the 24th to lie 1.5° (or three Moon-breadths) left of the star cluster on the 30th.

Mercury’s sister inner planet Venus is a morning object, brilliant at magnitude -4.3 to -4.1 but very low in the predawn twilight. As seen from Edinburgh, it rises in the east-south-east at 05:35 BST on the 1st and stands 8° high at sunrise, 69 minutes later. On the 30th, it rises due east only 50 minutes before the Sun and is 6° high at sunrise while Jupiter, fainter at magnitude -2.1 and just emerging from the Sun’s glare, lies 0.7° to its left.

Mars and Saturn might also be glimpsed through binoculars in the morning twilight. On the 1st, Saturn is almost 4° right of Venus and a shade lower, with Mars to Saturn’s right. Mars lies 0.3° below Saturn on the 5th and, by the 30th, it is 16° right of the Venus/Jupiter duo with Saturn a further 17° away. Mars is magnitude 1.0 and Saturn only a little brighter at 0.8 but clearly different in colour.

This is an extended version, with added diary, of Alan’s article published in The Scotsman on 31 March  2022, with thanks to the newspaper for permission to republish here.