There is plenty of stellar interest in our March sky, but planet-watchers are in for a disappointing time. From our northern latitudes, only Venus is obvious as it blazes above the south-eastern horizon before dawn, but even this “morning star” slips lower during the period. Mars is in its vicinity but much fainter and the two are joined by Saturn later in the month. The Sun’s glare hides both Mercury and Jupiter, the latter reaching conjunction far beyond the Sun on the 5th. 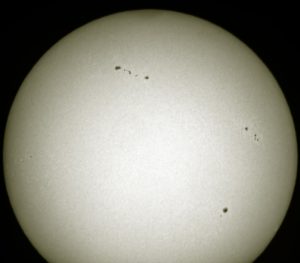 Anyone keeping a close eye (safely, of course) on the Sun over recent months must have noticed that sunspots have become more frequent. These giant magnetic storms on the solar surface often occur in groups and can survive for anything from a few hours to several weeks, taking almost two weeks to cross the solar disk as the Sun rotates.

The number of spots fluctuates in a rhythm of approximately 11 years and last peaked at a so-called solar maximum in 2014 before falling to a minimum late in 2019 when the Sun was spotless for days on end. That sunspot cycle was perhaps the weakest in a century and hopes for the new cycle, now underway and expected to peak in mid-2025, were not much better. To confound the experts, however, solar activity has soared so that sunspot numbers are double what was predicted and may be on course to hit their 2014 level before this year is out.

To check for ourselves it is vital that we observe the Sun safely – to look directly at it through binoculars or a telescope invites permanent eye damage. Instead, I have often suggested that we use a small telescope, or one side of a pair of binoculars, to project and focus the Sun’s image onto a white card held away from the eyepiece. An increasingly popular alternative involves fitting your instrument with a foil-like solar filter, easily obtainable online – do a web search for “safe solar observing”.

Solar flares, intense eruptions in the vicinity of sunspots, eject material that can impact the Earth and lead to auroral displays and geomagnetic storms. One of the most violent flares in years occurred on 15 February from a sunspot region on the Sun’s far side, sending a huge blast of material out into the solar system. The Earth dodged that particular bullet but not others recently.

Elon Musk’s SpaceX corporation may regret launching 49 new Starlink communications satellites into low Earth orbit on 3 February and into the teeth of a geomagnetic storm that hit just a day later. This heated the Earth’s atmosphere, increasing its density near the height of the new Starlinks to the extent that most became uncontrollable before they could start their climb to their operational altitude. Of the 49, all but eleven have been dragged down into the atmosphere and disintegrated.

Our late-evening star maps show Orion sinking into the west, but that constellation is a splendid sight due south as darkness falls at the beginning of March. Carry the line of Orion’s Belt one way to Taurus and the Pleiades and the other to Sirius, the Dog Star. Above and left of Orion is Gemini the Heavenly Twins where Castor stands above-right of Pollux. Although we need a telescope to separate them, Castor consists of several stars, all linked gravitationally. 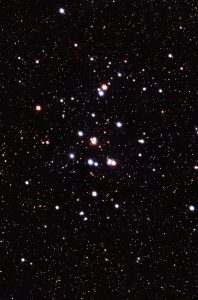 Well to the east (left) of Gemini, and reaching the meridian at the map times, is Leo the Lion whose head and mane is depicted by the Sickle. This reversed question-mark of stars curls above Regulus, Leo’s leader, and contains the superb double star Algieba (see map). Its duo of orange giant stars circle each other every 510 years and is visible through a telescope.

Between Gemini and the Sickle is the dim constellation of Cancer the Crab. Praesepe or the Beehive star cluster lies at its heart and is just visible as a hazy patch to the naked eye in the best conditions. Also catalogued as M44, binoculars show at least some of its individual stars which lie around 600 light years away, formed perhaps 600 million years ago and spread over an area three times wider than the Moon.

The Moon is new on the 2nd and makes for a stunning sight in the west at nightfall on the 4th and 5th when it is bathed in strong earthshine, caused by the full Earth in the lunar sky. The Moon climbs higher each evening to pass 4° below-left of the Pleiades on the 8th. First quarter is on the 10th, full moon on the 18th and last quarter on the 25th.

Venus rises for Edinburgh in the east-south-east at 05:06 on the 1st and climbs 11° into the south-east by dawn. By the month’s end it rises at 05:36 BST, only 70 minutes before the Sun, and is 8° high at sunrise. Fading from magnitude -4.5 to -4.3 and shrinking from 31 to 22 arcseconds across, its phase changes from a crescent to gibbous after it reaches its greatest angular distance of 47° from the Sun on the 20th.

Mars, much dimmer at magnitude 1.3 to 1.1, moves from 4° below Venus on the 1st to 6° below-right of Venus by the 31st. Saturn, a little better at magnitude 0.8, begins to emerge into the predawn twilight later in the month and moves from 5° below-left of Venus on the 24th to lie 3° below-right a week later. We may well need binoculars to spy Mars and Saturn in the twilight.

Times are GMT until 27th

This is an extended version, with added diary, of Alan’s article published in The Scotsman on 28 February 2022, with thanks to the newspaper for permission to republish here.