Astronomers can breathe again following the successful transformation of the James Webb Space Telescope from its folded and compact state at launch on Christmas Day to being fully deployed with its sunshield unfurled and gold-coated mirrors now in their correct configuration.

It reached its observing point 1.5 million km from the Earth on 24 January and is now tracing a halo orbit around the second Sun-Earth Lagrange Point where the gravitational pulls of the Sun and the Earth are in equilibrium.

The journey has been so painless and efficient that it has left the telescope with enough fuel to last considerably longer than the ten years initially planned, and perhaps as long as twenty. For now, though, the JWST is still cooling towards to operational temperature below -223°C, its mirrors must be aligned precisely and its instruments calibrated. Only then, hopefully by July, can its scientific observations begin.

February may be the shortest and one of the coldest months of the year, but with Orion in prime position in our evening sky it is certainly not lacking in stellar interest. The brighter planets are rather less exciting, being confined to the same part of the sky as the Sun and visible only around dusk and dawn. 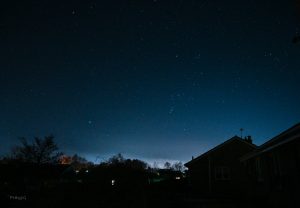 Orion is unmistakable in the south-east as our evening sky darkens, his iconic Belt slanting down to Sirius in Canis Major near the horizon. Follow the line of the Belt upwards to Taurus with its brightest orange giant Aldebaran and the Pleiades star cluster high in the south.

Also dubbed the Seven Sisters, the Pleiades make an impressive sight in a small telescope or binoculars which show there are many more than the traditional seven stars. Indeed, they may number in excess of 1,000 in total. All formed around 100 million years ago during Earth’s Cretaceous period while dinosaurs still ruled our planet. The cluster lies some 445 light years away so the light we see at present was emitted when Shakespeare was a boy.

By our star map times, Taurus and the Pleiades have progressed into the middle of our south-western sky and Sirius is at its highest due south, albeit only 17° high as seen from Edinburgh. The star shines at magnitude -1.46, brighter than any other star in our night sky. Although it is twice as massive and 25 times more luminous than our Sun, this is not exceptional as stars go and its prominence owes more to it being a near neighbour of the Sun at only 8.7 light years.

As our star map illustrates, Sirius marks the southern apex of what has become recognised as the Winter Triangle, an equilateral of bright stars that takes in the red supergiant Betelgeuse at Orion’s shoulder and Procyon in Canis Minor, which sits almost level with Betelgeuse to the left of Orion.

Just as Sirius is sometimes called the Dog Star, so Procyon is the Lesser Dog Star and their constellations represent the dogs that accompanied Orion. Incongruously, however, much of the area of the Winter Triangle is occupied by the relatively dim stars of Monoceros the Unicorn and there is no tradition of Orion taking a unicorn on his hunting forays. In fact, Monoceros appears to be the invention of a Dutch cartographer in the early 17th-century.

I talked of Betelgeuse last month but I neglected to say that, were our eyes tuned to near-infrared wavelengths rather than visible light, it would be Betelgeuse and not Sirius that would blaze as the brightest star in our sky. As it is, it is fainter than the blue supergiant Rigel at Orion’s knee, though there is a clear colour contrast between them.

Whereas Betelgeuse lies more than 500 light years away, Procyon is another of our neighbours at 11.5 light years, being seven times as bright as the Sun and 50% more massive. Like Sirius, it has a faint white dwarf companion star which is roughly Earth-sized but a challenge for even the largest telescopes.

We still have Jupiter as a bright evening object for the first week or two of February, though its altitude in Edinburgh’s west-south-west one hour after sunset drops from 10° on the 1st to only 4° by the 12th. On the 2nd, it shines at magnitude -2.0 as it stands 6° above the sliver of the young Moon, only 36 hours old. The Moon’s earthshine may be more impressive when it lies 10° above and left of Jupiter on the next evening. Saturn is now lost from view and reaches conjunction on the Sun’s far side on the 4th.

Venus is brilliant but low down in the south-east before dawn and at its brightest at magnitude -4.6 on the 9th. Rising for Edinburgh at 05:51 on the 1st and at 05:07 at the month’s end, its crescent shrinks from 49 to 32 arcseconds in diameter as its pulls away from the Earth. Just as 2021 was a poor year for Venus as an evening star, so this year sees it just as disappointing in the morning. Indeed, its current altitude of 13° at Edinburgh’s sunrise, is as high as it gets until July.

Mars stands 9° below-right of Venus on the 1st but is many times fainter at magnitude 1.4 as it tracks eastwards against the stars of Sagittarius to lie 6° below Venus on the 20th.

Mercury sits some 14° below and left of Venus and rises more than one hour before the Sun until the 12th. It brightens from magnitude 1.2 on the 1st to 0.1 on the 12th, but is a hard to spot in the twilight from our latitudes this month. This despite the fact that it is further from the Sun (26°) on the 16th than at any other time this year.

This is an extended version, with added diary, of Alan’s article published in The Scotsman on January 31 2021, with thanks to the newspaper for permission to republish here.