January’s Quadrantids meteor shower could be the best of 2022

Astronomers had their ideal Christmas Day gift with the successful launch of the James Webb Space Telescope. Now their focus is on the intricate and painstaking deployment of its sunshield and mirrors as it journeys towards its eventual vantage point far beyond the Moon.

Scotland’s new year begins with a clutch of naked-eye planets hanging above our south-western evening horizon and the first meteors of the Quadrantids shower appearing to herald what may be our best meteor display of 2022.

Even without all these diversions, our night sky is ablaze with stellar interest, much of it centred around Orion which is rising in the east as darkness falls and crosses the meridian before midnight. Bisected by the iconic three stars of Orion’s Belt and the equator of the sky, the easily recognised constellation is visible from every populous country and it is of no surprise that it is weaved into myths and cultures worldwide.

Its two brightest stars, normally among the ten brightest in the entire night sky, are the red supergiant Betelgeuse at his upper-left shoulder and the contrasting blue supergiant Rigel at his opposite knee.

Rigel pulsates slightly in brightness, but Betelgeuse is more noticeably variable and two years ago faded significantly when, we now believe, it ejected material which condensed into a cloud of dust that blocked much of the star’s light. The so-called Great Dimming of Betelgeuse led to speculation that it might be about to explode as a supernova – as it was, it demoted the star to around 30th in the stellar league tables, though it has now recovered and appears to be reasonably stable again near magnitude 0.7. 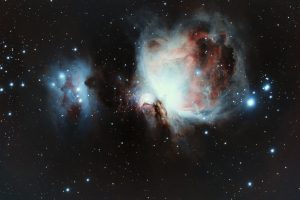 Below the Belt is Orion’s Sword, a row of dim stars dominated by the cloud of glowing gas and dust we call the Orion Nebula. The birthplace of new generations of stars and planets and lying at a distance of 1,350 light years, it is visible to the naked eye on a good night but becomes obvious through binoculars and spectacular in photographs.

The typical representation of Orion is that of a giant or, in Greek mythology, a hunter facing off against the charging bull, Taurus. He certainly goes well equipped, though, having not just a sword but also a club and a shield as depicted by lines of fainter stars on our south star map.

The north map plots the radiant point for the Quadrantids meteor shower, the direction in space from which its meteors appear to diverge. The shower persists until the 12th but is predicted to hit a sharp peak on the 3rd, possibly at around 21:00 GMT, and brings many bright meteors that can leave glowing trains in their wake. I well recall being startled by one Quadrantid that far outshone Venus and, as such, more than qualified to be classed a fireball.

We have all become more familiar with statistics over the past year or two, and meteor showers have one particular R-number of their own – their ZHR or Zenithal Hourly Rate. This is the expected number of meteors that may be seen by a single observer under ideal dark-sky conditions and, critically, with the shower’s radiant point nearly overhead. The ZHR for the Quadrantids varies between 60 meteors per hour in an off-year and 200 in a good one. What will 2022 bring?

The good news is that the shower’s maximum occurs just one day after new moon, so there is no moonlight interference this year. The bad news concerns not just our current nighttime temperatures, but also the radiant’s altitude at the shower’s maximum. The latter lies almost 15° below-left of the star Alkaid at the end of the Plough’s handle and stands only some 15° high in the northern sky at the map times – far enough from overhead to cut the expected number of meteors by threequarters. However, this shortfall reduces as the radiant follows the Plough to climb through the north-east later in the night of the 3rd-4th and approach the zenith before dawn.

Venus is into its final few days as a brilliant evening object before it swings around the near side of the Sun (inferior conjunction) on the 9th and into our predawn sky in the south-east. On the 1st it stands 5° high in the south-west thirty minutes after sunset, blazes at magnitude -4.2 and appears as an ultra-slender crescent, a full arcminute in diameter but only 2% illuminated. Mercury shines at magnitude -0.7 and 8° to Venus’ left, but while we soon lose Venus, Mercury hangs back as an evening object low in the south-west. 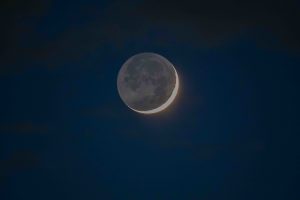 On the 4th the very young earthlit Moon lies to the left of Mercury and below Saturn, fainter at magnitude 0.7, while, by the 16th, Mercury is as dim as magnitude 1.7 and may be hard to glimpse to the right of Saturn. Both planets then disappear into the twilight, Mercury towards inferior conjunction on the 23rd and Saturn to the Sun’s far side on February 4.

They leave Jupiter as a conspicuous early evening object in the south-south-west to south-west though its altitude one hour after sunset halves from 20° to 10° during January and it dims slightly from magnitude -2.1 to -2.0 as its distance grows. Look for it above the earthlit Moon on the 5th and to the Moon’s right on the 6th.

By the 12th, Venus is rising in the south-east one hour before the Sun and this improves to more than two hours by the 31st when it is a dazzling magnitude -4.6 morning star. Before dawn on the 29th, Venus stands 16° above-left of the waning earthlit Moon with Mars, much fainter at magnitude 1.4, directly between them.

This is an extended version, with added diary, of Alan’s article published in The Scotsman on December 31 2021, with thanks to the newspaper for permission to republish here.