Planets align as the James Webb telescope readies for launch

With Orion rising above our eastern horizon earlier each evening, three bright planets lined up in our south to south-west and the return of the always-reliable Geminids meteor shower, December lacks little in the way of night sky interest. Astronomy enthusiasts, though, might be forgiven if their thoughts drifted to French Guiana in South America, and specifically Europe’s spaceport at Kourou at which the James Webb Space Telescope, the JWST, is being prepared for launch.

The telescope’s mirror has a diameter of 6.5 metres, as compared with the 2.4 metres of its predecessor Hubble, and will operate largely at infrared wavelengths. A joint project between NASA and both the European and Canadian Space Agencies, the JWST includes the Mid-InfraRed Instrument (MIRI) with which the UK Astronomy Technology Centre on Blackford Hill in Edinburgh has been closely associated.

To say that its launch has been a long time coming is an understatement. Conceived in the 1990s for a launch in 2007, delays have seen its cost rocket twenty-fold to almost $10 billion – all of it riding on a craft that will park 1.5 million km from the Earth, beyond any hope of repair if something goes wrong, and have a nominal operating life of five years, with hopes for a further five.

Its launch atop a European Ariane 5 rocket was pushed back yet again on November 22, from December 18 to “no earlier than” the 22nd. Given the time the JWST takes to reach its observing location, unfurl its sunshield and align its 18 hexagonal mirror segments precisely, it may be further three months before its science operations can really begin. 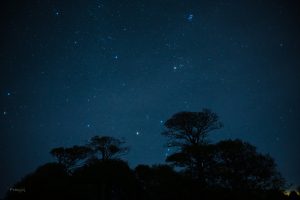 Orion rising with the Pleaides above. Castor and Pollux in Gemini to the left. Image by Fran Goodman

Our December star charts show the familiar form of Orion climbing into the south-east, having risen in the east two hours earlier. Above it is Taurus where the Pleiades star cluster is 5° above the bright Moon on the 16th. Orion stands astride the meridian by midnight at midmonth, as Capella in Auriga stands overhead and Sirius, our brightest nighttime star, twinkles furiously lower in the south-south-east.

Above-left of Orion is Gemini whose leading stars Castor and Pollux lie one above the other as they climb though our eastern sky during the evening to pass high in the south in the early morning. It is from a radiant point close to Castor (see map) that medium-speed meteors of the Geminids shower appear to diverge, though the meteors themselves can flare anywhere in the sky.

The shower lasts from the 4th to the 17th, but it is expected to build to a peak overnight on the 13th-14th. Bright moonlight interferes, but we should have around four moonless hours before dawn on the 14th, when, with the radiant high in the sky, meteor rates could exceed 100 per hour for an observer under ideal conditions.

The sole bright planet visible at our star map times is Jupiter, low down in the south-west and dimming slightly from magnitude -2.3 to -2.1. As the night begins, though, it is prominent and close to 20° high in the south as it creeps eastwards against the stars and moves from Capricornus to Aquarius.

Much brighter still, and peaking at the dazzling magnitude of -4.7, is Venus, though we need a clear horizon below and to Jupiter’s right to catch it earlier in the evening. On the 1st, it stands 9° high in the south at Edinburgh’s sunset and sets itself 153 minutes later in the south-west. By the 31st, it is 8 degrees above the south-western horizon at sunset and visible for only 88 minutes. During the month its disk swells from 39 to 61 arcseconds as it swings around the near side of its orbit and its distance plummets from 64 million to 41 million km. Binoculars show its crescent narrow from 28% of the disk on the 1st to barely 3% on the 31st, by which time some people may be able to distinguish it with the naked eye.

Saturn is considerably fainter at magnitude 0.7, roughly halfway between Venus and Jupiter and sets in the south-west 90 minutes after our map times. The young earthlit Moon lies to the left of Venus and below-right of Saturn on the 7th and below the middle of the Jupiter-Saturn line on the 8th.

Venus serves as a guide to Mercury on the 31st, when it lies 6° to Mercury’s right and a degree higher in the bright twilight. Mercury may be glimpsed through binoculars at magnitude -0.7. Mars, is an undistinguished magnitude 1.6 morning object very low in the south-east before dawn where it stands below-left of the waning earthlit Moon on Thursday and again on the 31st.

Comet Leonard was discovered on January 3 this year and is on its way to perihelion, 92 million km the Sun, exactly a year later. As this month begins it may be a seventh magnitude object in Coma Berenices. This puts it 20° south of the star Alkaid in the Plough (see map) and well up in our eastern sky before dawn, but also very low in our north-western sky at nightfall.

The comet passes 5° north of Arcturus in Bootes on the 6th and may be nearing its brightest, perhaps near the 4th magnitude, on the 13th as we lose it in the dawn twilight, though it remains very low in the west at nightfall for a few more days. Of course, comets are fickle creatures and Leonard may surpass expectations or disappoint us altogether.

This is an extended version, with added diary, of Alan’s article published in The Scotsman on October 30 2021, with thanks to the newspaper for permission to republish here.