What’s in a name? The Tribbles are loose!

What’s in a name? The Tribbles are loose!

How do astronomical objects get their common names? Dumbbell Nebula, Pacman, Cave, Bubble, Flaming Star, Lagoon, Triffid… Some are very obvious, others less so. But who says that’s what they’ll be named? 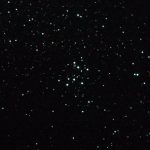 These aren’t official designations at all but often used by amateurs who like to image them and professionals who can refer to them more colloquially this way. Some of the names are very obscure – take for example the Cooling Tower Cluster, M29. Really?

So I came across a couple of objects recently that didn’t seem to have any names – and finding the designation of one was a little tricky. So I imaged them – see the banner. NGC 1624 is an Open Cluster within an Emission Nebula (also known as Sh2-212) in the constellation of Perseus. Close by is another similar but smaller object, Sh2-211. Neither seem to have a common name but both look like fluff-balls to me. So the President of the Astronomical Society of Edinburgh has decided to call them the Tribble Nebulae.

Who’s to say I can’t call them that and how can I make it stick? If they have names then they are more likely to be found and observed or imaged by amateurs aren’t they? William Herschel said that Mu Cephei had a “a very fine deep garnet colour” and the name Garnet Star stuck. So why should he have all the fun? Let’s give it a shot! 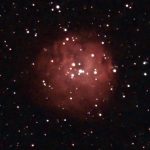 Updating the entry in Wikipedia is a start and doesn’t detract or make the content incorrect. In fact in the process I added more useful information about the objects than was there originally. The image on Flickr, my BAA image gallery and this post are other references for the name. And if other imagers want to capture them and say they’ve got the Tribble Nebulae too then that has to be good doesn’t it? Maybe we should start our own ASE Catalogue of Unnamed Astronomical Objects (ACUAO) and give them names. We already have our own catalogue: ASE-24: Observing list for beginners, which has proved to be very useful, so why not?

Why Tribble Nebulae? Well Tribbles were small furry creatures in the original Star Trek in an episode called “The Trouble with Tribbles“.  Spread the word – the Tribbles are loose in Perseus!