Our southern evening sky is still ruled by the giant planet Jupiter, guarded some 15° to its right (and a shade lower) by the less conspicuous Saturn. Vega, Deneb and Altair, the bright stars that make up the Summer Triangle, stand high in the south at nightfall but have toppled into the middle of our western sky by our map times. Meanwhile, the striking constellations of winter are beginning to climb in the east. Heralding their arrival are Taurus and the Pleiades star cluster, but the focus soon switches to the glorious form of Orion which rises below Taurus and strides southwards to cross the meridian before dawn.

The Square of Pegasus is reaching our high meridian at the map times but is not particularly striking. Indeed, its corner stars stand no comparison with those of the Summer Triangle while the area they enclose is notable chiefly for its paucity of naked-eye stars. 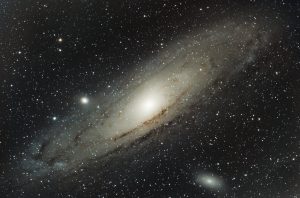 The north-eastern (top-left) star of the Square, Alpheratz, actually belongs to Andromeda and is a crucial link in the “star hop” that takes us to the famous Andromeda Galaxy, now at its best in our evenings. Extend the upper side of the Square to the left beyond Alpheratz for a similar distance to reach the equally-bright Mirach, then “make a right” along a spur of two dimmer stars. The galaxy, also known as M31 or Messier 31 after the French astronomer who first catalogued it, lies alongside the second/fainter of these. Appearing as a fuzzy oval to the unaided eye, and quite obvious through binoculars, it lies 2.5 million light years away and it is somewhat larger than our own Milky Way.

An expanse of sky to the south of the Square is occupied by the so-called watery constellations and the region has even been dubbed the celestial sea. It is not clear, though, whether its origins relate to the rainy season in the Middle East or to a mythological ancient flood.

In the west of this region is Capricornus the Sea Goat, currently playing host to Saturn and Jupiter and representing a creature that is part goat but with a fishy tail. Next comes Aquarius the water carrier whose overflowing jar, depicted by a Y of five stars (see map), spills its contents southwards towards Piscis Austrinus (the Southern Fish) whose leading star, Fomalhaut, is the 18th brightest in the entire sky but climbs no more than 5° above Edinburgh’s horizon.

Following Aquarius is Pisces the (two) fish with its distinctive Circlet of stars just below the Square. The farthest planet, Neptune, is a magnitude 7.8 binocular object some 8° below the Circlet at present while the second most distant planet, Uranus, sits in Aries, to the left of Pisces, and is seven times brighter at magnitude 5.7. The watery theme extends southwards from Pisces to Cetus the Whale or Sea Monster and even further to Eridanus the River which flows all the way to Orion.

Venus continues as a brilliant evening object, though we may still struggle to see it from our northern latitudes even though it stands furthest from the Sun (47°) on the 29th. As seen from Edinburgh, it is only 5° high in the south-west at sunset on the 1st, and sets itself 53 minutes later. By the 31st, it is less than a Moon’s breadth higher in the south-south-west at sunset and visible for 88 minutes.

It brightens this month from magnitude -4.2 to -4.4 and approaches from 132 million to 98 million km. A telescope shows its disk swelling from 19 to 26 arcseconds in diameter while its phase evolves from 62% to 48%, being 50%, like a miniature first quarter Moon, on the 28th. In fact, our Moon is 15% illuminated when it stands 2.3° above-right of Venus on the 9th and Venus itself stands 1.4° above the star Antares in Scorpius on the 16th, though whether we can see the star in the twilight is another matter.

Mercury enjoys its best morning appearance of 2021 later in the month, making for an excellent opportunity if we’ve yet to spot this elusive innermost planet. From the 20th to the 31st, it rises more than 105 minutes before the Sun and stands 6° to 7° high in the east-south-east one hour before sunrise. Brightening sharply from magnitude 0.2 to -0.8, it should be easy to pick out in the twilight if our horizon is clear. It is furthest from the Sun (18°) on the 25th. 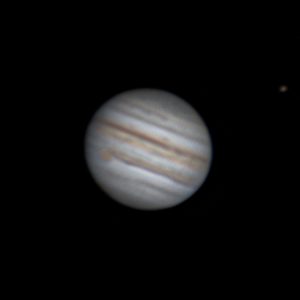 There really is no mistaking Jupiter which moves from the south-south-east at nightfall to pass about 19° high in the south for Edinburgh one hour before our star map times. This month its increasing distance causes it to dim slightly from magnitude -2.7 to-2.5, but it barely shifts at all against the background stars of Capricornus, reaching an official stationary point on the 18th when its progress reverses from westerly to easterly.

Saturn, to the right of Jupiter and reaching its stationary point in Capricornus on the 11th, dims from magnitude 0.5 to 0.6 so it is still comparable with the brighter stars until it sets, followed by Jupiter, in the south-west in the early morning hours.

Catch the gibbous Moon (68% sunlit) below-left of Saturn and below-right of Jupiter on the 14th. On that evening, Jupiter is 44 arcseconds across if viewed telescopically, while Saturn is 17 arcseconds wide, its beautiful rings spanning 39 arcseconds with their north face tipped at 19° in our favour.

Our diary lists two meteor showers this month. The first, active from the 6th to the 10th and peaking on the 8th, is the Draconids which is sometimes called the Giacobinids after their parent comet, Comet Giacobini-Zinner. The shower usually produces only a handful of meteors that flow gracefully and slowly away from a radiant point in the Head of Draco, the quadrilateral of stars that lies around 15° to the right (north) of Vega on our northern star map. The Draconids, though, can give us a pleasant surprise – thousands of meteors per hour were seen in 1933 and 1946 and hundreds per hour were seen as recently as 2011. Given that there is no moonlight to interfere this year, it just might be rewarding to “watch the skies” on the 8th.

Our second shower is more reliable but peaks under full moon conditions on the 21st. Meteors from the Orionids shower have a radiant to the north-east of Orion and begin to appear after our map times as Orion rises in the east. Were it not for the moonlight, some twenty Orionids per hour might have been seen near the maximum – all of them fast and the brighter ones leaving glowing trains in their wake.

This is an extended version, with added diary, of Alan’s article published in The Scotsman on September 30 2021, with thanks to the newspaper for permission to republish here.