The planet Jupiter dominates our nights as it crosses our southern sky from low in the south-east at nightfall to set in the west-south-west during our morning twilight. Our star maps plot it about eighty minutes before it reaches its highest point at 20° in the south as seen from Edinburgh. 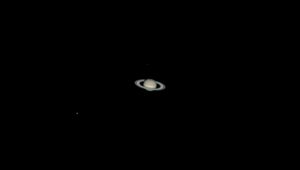 The most obvious other planet is Saturn which lies some 17° to the west (right) of Jupiter and traces an arc across the sky that is 5° lower than that of its brighter and larger neighbour. Both are creeping westwards in Capricornus while high above them, and slightly west, is the asterism of the Summer Triangle formed by the bright stars Altair in Aquila, Vega in Lyra and Deneb in Cygnus.

While the early months of the year provide our most spectacular evening skies, the coming weeks give us our best views of the Milky Way as it flows through the Summer Triangle and overhead as dusk subsides. To catch its misty glow, though, we need to pick a moonless evening and escape the light pollution that swamps so many of us.

Made up of the combined light of millions of distant stars in the plane of our disk-shaped galaxy, itself called the Milky Way, its path at our star map times takes it upwards from Sagittarius on the south-western horizon to sweep to the right of Altair and close to Deneb in Cygnus before tumbling downwards in the north-east through the “W” of Cassiopeia and to the right of Capella in Auriga. 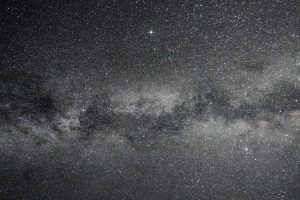 Summer Triangle and the Milky Way by Jon Watson

The Milky Way’s brightness and profile is far from uniform. It dims noticeably below Cassiopeia and is brighter in the south where it is divided by obscuring clouds of interstellar gas and dust that lie closest to the plane of the galaxy’s disk. One lane of darkness, dubbed the Great Rift, is particularly obvious as the Milky Way traverses the Triangle and represents just one of the problems faced by astronomers in mapping the true size and shape of our galaxy from our viewpoint within it.

Decades of research, often using radio astronomy which can penetrate the clouds, have shown that we inhabit a so-called barred spiral galaxy. Its arms of gas, dust and stars unwind gently from the ends of an elongated central bar, where older stars predominate. The whole edifice is anchored around a supermassive black hole some 26,000 light years away towards the western edge of Sagittarius.

Now, though, infrared observations from the NASA’s now-retired Spitzer Space Telescope combined with star distances and motions measured by the European Space Agency’s Gaia spacecraft show that one of our nearest spiral arms, itself called the Sagittarius Arm, has an unusual break. This takes the form of a region of gas and dust and star-formation that is some 3,000 light years long and juts out of the arm at a high angle “like a splinter poking out from a plank of wood”. The region is just above our south-western horizon at our map times and hosts several of our best-loved photogenic nebulae, including the Lagoon, Trifid, Omega and Eagle nebulae, the latter being home to the iconic Pillars of Creation.

Venus is brilliant for observers further south, but all-too-easy to miss in our early-evening twilight unless we have a clear and flat horizon. It is only 6° high in the west-south-west at Edinburgh’s sunset tomorrow, and a degree lower than this in the south-west at the month’s end. The planet sets itself around 50 minutes after the Sun and, even though it brightens this month from magnitude -4.0 to -4.2, we may be best to locate it using binoculars. One helpful pointer is the young crescent Moon which lies 6° above-right of Venus on the 9th and 8° above and to its left on the 10th.

Mercury stands furthest east of the Sun (27°) on the 14th but remains hidden in our evening twilight, as does Mars which is due to pass around the Sun’s far side in October. Uranus and Neptune are binocular objects at magnitudes 5.7 and 7.8 in Aries and Aquarius respectively, the latter standing 4,326 million km away at opposition on the 14th.

Our autumnal equinox occurs on the 22nd when the Sun crosses southwards over the equator and days and nights are approximately equal around the world. Edinburgh’s sunrise/sunset times progress from 06:17/20:07 BST on the 1st to 07:14/18:50 on the 30th while the Moon is new on the 7th, at first quarter on the 13th, full on the 21st and at last quarter on the 29th. The bright Moon sits below-right of Saturn on the 16th, below-right of Jupiter on the 17th and below-left of Jupiter on the 18th.

During its monthly journey around the sky, the Moon sometimes passes in front of stars, hiding them for a time during what are called occultations. Events involving the brighter stars are surprisingly rare, but two occur early in September when the waning crescent Moon hides third magnitude stars in Gemini in our eastern predawn sky.

On the 2nd, the magnitude 3.1 star Epsilon Geminorum, or Mebsuta, disappears at the bright left edge of the Moon, near the 8 o’clock position, at 01:16 BST as seen from Edinburgh and reappears instantaneously from behind the Moon’s dark limb near the 2 o’clock position at 02:09. Kappa Geminorum (magnitude 3.6) takes an almost identical path behind the Moon on the next morning, with its disappearance at 03:45 and reappearance at 04:43. The occultations are best viewed through a telescope but allow for the times to be a little different if you are not in Edinburgh – for example, both events occur around four minutes later for watchers in Stornoway. 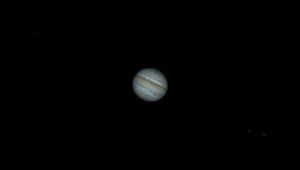 Jupiter dims slightly from magnitude -2.9 to -2.7 and shows a 48 arcseconds disk through a telescope at mid-month with its four main moons in attendance or crossing in front of, or beyond, its disk. Saturn, magnitude 0.3 to 0.5, has the north face of its striking rings tilted 19° to the Earth and spanning 41 arcseconds around its 18 arcseconds globe.

Two notable double stars in Capricornus, identified as Algedi and Dabih on our chart, stand a few degrees above-right of Saturn.

Algedi is a wide naked-eye double whose component stars, both yellow giants, appear separated by about a sixth of the diameter of the Moon. In reality, the double is a line-of-sight effect – the brighter of the two stands 106 light years from us while the fainter is more than six times further away.

Binoculars, or even the naked eye, show Dabih as a pair of stars about half as far apart as those of Algedi. These lie some 330 light years away and probably orbit each other every million years or so. Studies reveal that the brighter is actually three stars in tight formation, while the fainter is itself double so that Dabih actually consists of at least five stars.

This is an extended version, with added diary, of Alan’s article published in The Scotsman on August 31 2021, with thanks to the newspaper for permission to republish here.