For most of the rest of 2020 Mars is going to be a prominent evening object and the best placed planet to observe, so don’t miss out on seeing it at this favourable apparition.

Mars has always fascinated observers because it is so close, has an atmosphere and has seemed the most likely planet in our solar system to harbour some form of life. Three missions are already on their way to Mars, launched in July, but “…the chances of anything coming from Mars are a million to one….”! Anyway, enough of the science fiction, how can we observe or image it?

Mars never approaches the same size that gas giant Jupiter does (46.9″) but this year it will be a pretty decent size for the planet, reaching 22.6 arcseconds and a magnitude of -2.6 at its closest point to Earth on 6 October. In 2020 Jupiter and Saturn have been very low in our skies making them very difficult to observe through many layers of atmosphere, but Mars will be much higher, up to 42 degrees, making it much  easier to observe. Keep an eye on Alan Pickup’s Sky Diaries over the next few months for updates.

Here’s a graph showing how the planet’s apparent angular size changes over the next few months.

You’ll need to use a higher magnification (as much as your telescope will allow given the seeing conditions) to see much on Mars but even through a small telescope (70 – 100mm aperture) you should be able to make out some dark markings and maybe even the south polar cap, although that may shrink to be quite small as the planet is closer to the Sun. Interestingly, to make it appear in a telescope the same size as the full Moon seen with the naked eye requires a magnification of only about 80x, although you’ll probably want more than that.

To make out much visually you’ll need a larger aperture and good seeing conditions – not something we get a lot of in Scotland. Seeing is the steadiness of the atmosphere and when unsteady the image will appear to boil in the eyepiece and jump about all over the place. But even then there may be fleeting moments of calm where you can make out some of the features. Drawing a planet is a good way to increase your skills as an observer and over time you’ll actually learn to see more details this way.  There’s an interesting and useful article about drawing planets on the BAA website and a useful Mars Mapping Tool to let you know what it is you might see.

You can image Mars in a number of ways:

Using a relatively inexpensive camera (e.g. ZWO ASI 224mc) you can capture a video of Mars for say 120s at a frame rate of maybe 60 to 120 frames-per-second and that will allow you to capture those brief moments of calm when the details of the planet are visible. You then process the video in AutoStakkert, for frame selection and stacking, and then Registax for sharpening using wavelets. You can get some amazing results this way and we are already seeing some superb pictures from amateurs. You can find out more about this sort of imaging in our Introduction to Astro-imaging Course: Part 3.

A device that has become popular recently and more affordable is an ADC: Atmospheric Dispersion Corrector. This is an optical device that reduces the amount of smearing caused by our atmosphere, especially at low altitudes, providing a sharper image.

If you want to study Mars more seriously then you could join the Mars Section of the BAA. 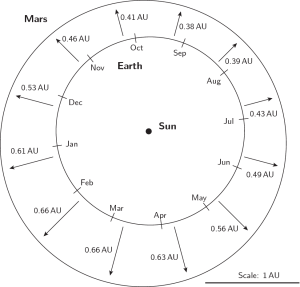 Why is this a good apparition?

Earth’s orbit is very circular in comparison to Mars which has an oval shaped, elliptical orbit, as you can see from this drawing. The Earth-Sun distance only changes by about 3% over a year but for Mars that’s more like 20%. So when oppositions occur during August to October, you can see that Mars is much closer to the Earth and therefore bigger and brighter in our night sky. In fact at this time of year it can appear up to 60% larger than at a March opposition. This year Mars reaches perigee (closest point to Earth) on 6 October, so it is a good apparition. Perigee and opposition are different: opposition occurs when Mars is directly opposite the Sun as seen from Earth and this is on 14 October in 2020.