Archie Howitt shows us how he created an offset solar filter for his Celestron 8-inch SCT.

Here I will describe how I made an Offset Solar Filter for my Celestron C8 Schmidt-Cassegrain (SCT) telescope, why I chose this design and the materials used.

1. The Celestron C8 SCT has an 8 inch diameter aperture, housing a corrector lens. This is a large piece of glass which has to be protected from the heat of the Sun’s rays, along with the internals of the telescope. For telescopes with apertures larger than 8 inches, offset solar filters are recommended. This gave me my first design objective.

2. I had made a full aperture solar filter before for my 4 ½ inch Tal-1 Newtonian telescope using an A4 sheet of BAADER AstroSolar Safety Film and had a small piece left over for this project. Although this film is fairly robust, great care must be taken in its use. I store my Tal-1 filter in a box and test it for pin holes or scratches before using it. THIS IS AN ESSENTIAL SAFETY PRECAUTION – DO NOT USE THE FILM IF IT IS DAMAGED IN ANY WAY!

3. Corrugated cardboard would be used in the construction since I had a large cardboard box from a recent printer purchase. I decided to make the filter round with a flange overhang to give shading to the telescope tube. The ideal size was 12 inches diameter – not too big to be cumbersome and not too small to be ineffective.

4. The offset filter aperture size would be governed by the leftover piece of film and although the secondary mirror mount and the edge of the corrector lens fixing may not affect the image outcome, I decided to keep the aperture within the unobstructed corrector lens area.

5. Insulation would be provided by covering the filter body with aluminium kitchen foil. Two 12-inch diameter discs would be required, one to carry the main body of the filter and the AstroSolar film, the second to provide an extra insulation layer on the front of the filter body. 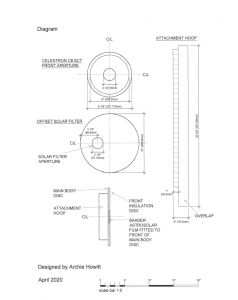 2. From the edge of each disc measure in 3 ½ inches and cut an aperture 2 ¼ inches diameter in each disc where the AstroSolar film will be fixed (DO NOT FIX THE FILM ON AT THIS STAGE)

3. Cut a 3 inch wide strip of corrugated cardboard the circumference of the outside of your telescope aperture plus a 4 inch overlap and roll it flat with a rolling pin. This will make it easier to form the hoop to attach the filter to the front of the telescope. (C + 4 = 2𝜋𝑟 + 4 ≅ 32 ¾ inch where outside diameter = 9 ⅛ inch)

4. Draw a line the length of the cardboard strip 1 inch from the edge, mark 1 inch increments along the edge and cut tabs from each mark to the line.

5. Fold the tabs over and form a hoop with the strip, tabs facing outwards.

6. With the hoop the correct circumference for your telescope aperture bezel, glue the overlap ends together. A couple of paper clips may help to hold them until the glue sets.

7. Glue the hoop tabs to one of the discs to form the filter body keeping the hoop equidistant from the edge of the disc.

9. Carefully cut a star shape in the foil covering the aperture. Poke and glue the foil through to the back of the disc.

11. Place both discs together and align their apertures. With a felt tip pen mark their edges to indicate their relative position.

12. Attach a generous piece of BAADER AstroSolar Safety Film across the outside of the main filter body disc aperture with duct tape to provide a light tight seal all round.

13. Replace the second disc on top of the main body disc aligning it with the marks made earlier and fix them securely together around the edges with tape.

14. Test there are no flaws in the film material by holding the filter up to a light – NOT THE SUN!

15. If all is well, attach the filter to the telescope and cut out a notch in the hoop to clear the Vixen dovetail bar.

16. The filter is now complete and ready for use.

!!WARING: NEVER LOOK DIRECTLY AT THE SUN THIS WILL CAUSE PERMANENT DAMAGE TO YOUR EYES!! 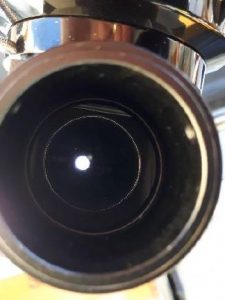 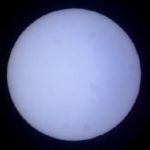 Care must be taken when observing the sun or using a telescope in daylight hours. Sunlight through a telescope can cause internal damage due to rapid excessive overheating. Instant blindness would also be the result if you were to look through the telescope eyepiece, the job of which is to concentrates the image to a focal point. It is therefore recommended, to avoid accidents, not just to cover up your finderscope but to remove it completely along with any eyepiece in the telescope focuser. The telescope aperture cover should only then be removed to be replaced immediately with a solar filter.

With the offset solar filter in place, and all the above precautions taken, point the telescope towards the Sun and use the telescope shadow to obtain alignment. Remove the focuser dust cap and look into the focuser. You will see in the centre an image of your eye looking back at you from the secondary mirror. Gently move the telescope in both azimuth and altitude until you see a bright disc appear to one side of your eye image. Keep moving the telescope until this disc is as bright as it can get. This indicates that the Sun is aligned with the BAADER AstroSolar
Safety Film aperture. Insert an eyepiece and centre the Sun image. I have a 40mm lens which gives me a complete viewing image of Sun’s disc.

Unfortunately, there were no sunspots in April 2020 when I took this image. When sunspots reappear and I have an opportunity to capture one I will update this guide. I do not know how long the solar minimum will last, but it will be fun to keep looking for sunspots to return.

Images and text by Archie Howitt