The main talk was given by Prof Colin Cunningham of Edinburgh University who described the many engineering and scientific challenges associated with the building and future operation of the ELT. It’s 39m mirror(s) having a larger area that all the existing research telescope mirrors (>1m) in operation today. 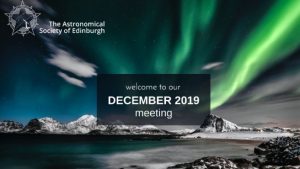 Also at the meeting:

The next meeting was announced as focussing on Light Pollution and it is anticipated that the other usual agenda items will be omitted apart from the Sky in Feb. The audience for this event will include a number of invited organisations representatives