Why is Jupiter so low down?

Why is Jupiter so low down?

Remember just a few years ago it seems, Jupiter was in the winter sky, high up and easy to observe. So much easier than now, when it barely clears the tree-tops and is seen through thick layers of atmosphere. What’s that all about, and when will it be easier to view again?

As I write this, Jupiter will transit (due south and at its highest point in the sky) at about 12:30 BST at a declination of -22 degrees. Which means that from Edinburgh it will be less than 12 degrees above the horizon. I took the picture above just a few minutes ago to illustrate the point.

Unfortunately Jupiter will still be very low again in 2020, at about the same declination and altitude as this year. But fear not, it will then be on its way back up the northern sky, reaching the celestial equator (declination 0 degrees) in 2022, and will reach its peak declination of about 24 degrees in 2024.

There is a correlation between what time of year Jupiter reaches opposition (opposite the Sun as seen from Earth) and its declination. This from in-the-sky.org: 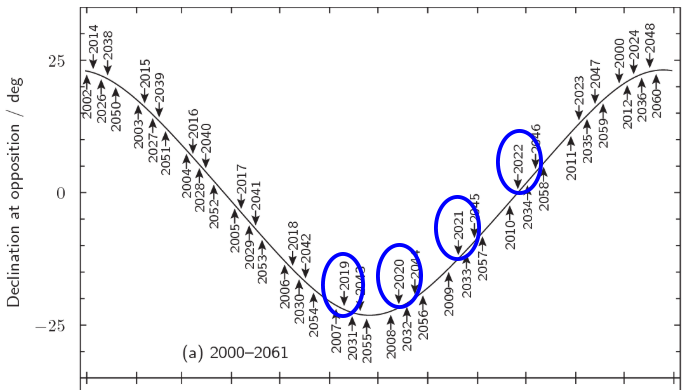 The chart shows the declination of Jupiter for each year. So next year won’t be great again – but get ready for the 2021 and 2022 oppositions – and beyond. Jupiter is one of the most fascinating planets to study and definitely worth the effort!