Get ready for the Geminid meteor shower

Get ready for the Geminid meteor shower

The reliable Gemind meteor shower peaks on the night of 13/14 December. In 2018 the 34% Moon conveniently sets by about 10pm on 13 December to leave a dark sky for observing them.

Watching these wonderful streaks of light, flashing across the sky is always a favourite spectacle to show to non-astronomer family and friends. The Geminids rarely fail to perform and impress. If it’s clear, grab the nearest person, put a hat and coat on and get outside! 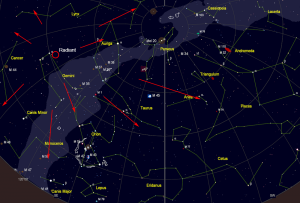 Meteors from the shower can appear any time between 4 – 17 December but the peak is over the night of 13-14. Although the Zenith Hourly Rate (ZHR) is about 120, because of the radiant’s altitude we can probably expect something like 50 meteors per hour at its peak. You are more likely to see more meteors as Gemini rises higher in the sky in the early hours of the morning of 14 December.

The radiant is the point from which the meteors appear to radiate in the sky, and for the Geminids this is close to one of the twins, the  mag. +1.6 star Castor (α Geminorum). The chart shows the sky at 10pm on 13 December, just after Moon-set, when Gemini is about 40 degrees altitude in the east, Orion is dominating the south-east and the bright star Capella in Auriga is high overhead.

The Geminds, first observed in 1862, are cause by asteroid 3200 Paethon, and so are unusual because most meteor showers originate from cometary debris, not asteroids. They are medium speed meteors, moving at speeds of 35 km/s, and are probably one of the most consistent annual meteor showers.

However, you never know when a meteor shower is going to put on a special display, as the Geminids did in 2014. Then the number of visible meteors more than doubled over the rates from a normal year. So always worth keeping an eye on it.

Observing and imaging the Geminids

Wrap up warm! It is December after all and you don’t want to miss the display because you’re too cold.

You don’t need anything other than a little patience to observe the Geminids. Just lie back in a reclining chair if you can (saves a lot of neck pain) and look up. The advice is usually to look about 30-40 degrees away from the radiant and about 60 degrees up to get a good chance of seeing more meteors. So looking over the constellation of Orion would be a good place to start. But remember meteors can appear in any part of the sky at any time. The closer to the radiant they are, the shorter the trails will be –  further away trails appear longer. 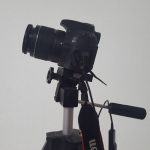 To image meteors a camera on a fixed tripod is sufficient, preferably with a remote shutter release, but this is not essential as you can use the camera’s delay timer. The length of exposure you can use without stars appearing to trail is dependent on the focal length of the lens you are using. A basic rule of thumb is to divide 500 by the focal length of the lens, and that gives you the exposure in seconds. For example, a 28mm focal length lens should be able to do 18 seconds without any significant trails showing. Work out what the best ISO is for your camera to make it as sensitive as possible without introducing too much noise. Something between 800 and 3200 should be fine.

Because stars are faint and small your auto-focus may not work well – or at all – so you will probably have to focus the camera manually. This is critical! There’s no point spending an evening taking hundreds of exposures only to find that all of them are blurred afterwards. Take some time over this to get it spot on. Here’s a tutorial on using Live View to get the focus right.