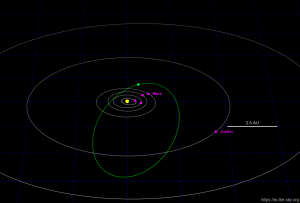 Periodic comet 21P/Giacobini-Zinner is now brightening and expected to reach a peak magnitude of 7.1 on 5 Sep 2018. This will make it a binocular and telescopic target. Its position in the sky should also make it easy to observe and image from Edinburgh once the summer twilight leaves us.

On 1 August it should be mag 9 brightening to mag 8 on 15 August. It moves from the constellation Draco to Cassiopeia and then on to Camelopardalis during August. This makes it a circumpolar object for most of August, meaning that it never sets from Edinburgh.

It’s always difficult to predict precisely what a comet’s brightness will be as it approaches the Sun, so worth keeping an eye on them as they may have outbursts of activity as they heat up.

21P/Giacobini-Zinner is a regular returner to our skies with an orbital period of 6.54 years. Its closest point to the Sun is at 1.01 AU, almost exactly the same distance as Earth is from the Sun. It then travels out to a distance of 5.98 AU, just beyond the orbit of Jupiter.

Comet Giacobini-Zinner is the comet responsible for the Draconid meteor shower which normally happens 6 – 10 October each year. Normally this is not a particularly active shower with a ZHR (Zenith Hourly Rate) of about 10 meteors per hour. However, this year it’s possible that we may see a ZHR of 20-50 meteors per hour, because on the 9th October this year we will pass through the dust left by the tail of the comet in 1900. One to watch maybe and we’ll update you about it closer to the time.

Here’s an image from our Flickr group taken by Mark Phillips. There are 20 x 15s frames, taken over 14 minutes, stacked together and aligned on the comet nucleus. Because the comet is moving against the stars they appear to trail. 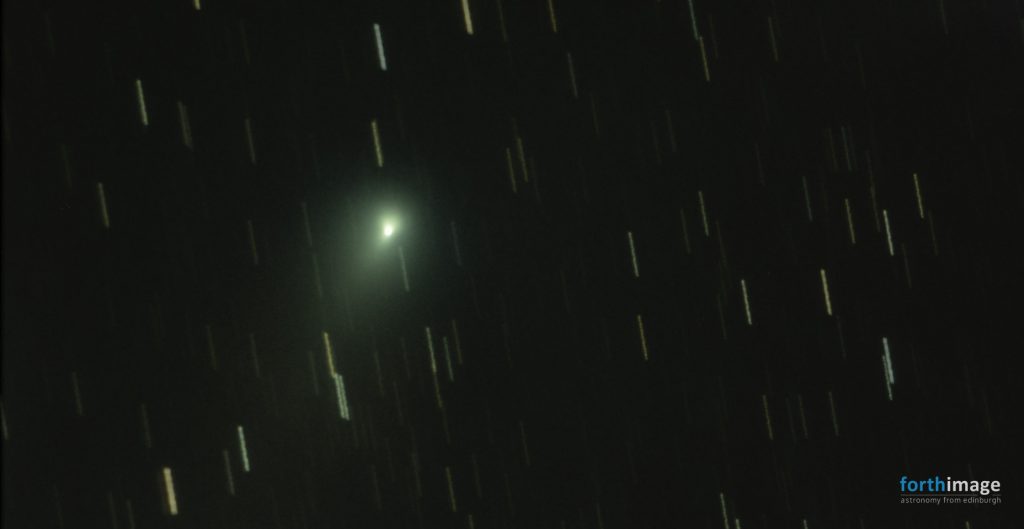