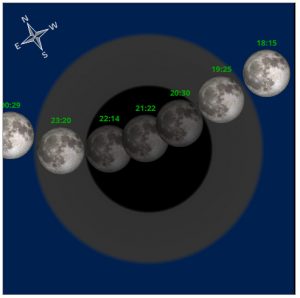 There will be a total eclipse of the Moon on Friday 27th July. The Moon will rise fully eclipsed as seen from Edinburgh at 21:21 BST.

The full moon will rise at about 128° in the East Southeast sky at 9:21 pm, just as the sun sets. The eclipse will be at full stage then, so from Scotland it starts when the moon is well below the horizon. So the large rising moon will be blood red when it rises. Furthermore, Mars will be to the southeast of the Moon in the sky, but won’t rise until 10.25 pm, just as the total part of the eclipse is ending.

Our President Andrew Farrow will be at Blackford Hill with a camera, long lens and tripod if anyone wants to come along. Assuming of course that the weather is kind.

The ASE got a mention in a Scotsman article about the eclipse.

Sadly it calls it an “astrological phenomenon” and says clear skies are forecast (they’re not!).

Members of the Astronomical Society of Edinburgh will be heading to the Royal Observatory on Blackford Hill to capture the sight. It will be another two decades before we will see another lunar eclipse anywhere near as long as tomorrow.

A spokesperson for the Astronomical Society of Edinburgh said: “The lunar eclipse on Friday is different due to our position relative to the alignment of the sun and moon providing the longest period of totality this century. If anyone wants to see as much of the event as they can they should head for high ground.”