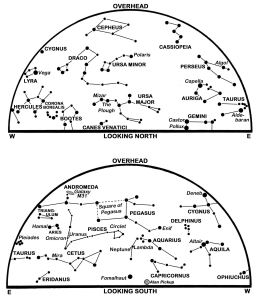 Our charts capture the sky in transition between the stars of summer, led by the Summer Triangle of Deneb, Vega and Altair in the west, and the sparkling winter groups heralded by Taurus and the Pleiades star cluster climbing in the east. Indeed, if we look out before dawn, as Venus blazes in the east, we see a southern sky centred on Orion that mirrors that of our spectacular February evenings. October also brings our second opportunity this year to spot debris from Comet Halley.

As the ashes of the Cassini spacecraft settle into Saturn, the planet reaches a milestone in its 29-years orbit of the Sun when its northern hemisphere and rings are tilted towards us at their maximum angle of 27.0° this month. In practice, our view of the rings’ splendour is compromised at present by its low altitude.

Although it shines at magnitude 0.5 and is the brightest object in its part of the sky, Saturn hovers very low in the south-west at nightfall and sets around 80 minutes before our map times. The rings span 36 arcseconds at mid-month while its noticeably rotation-flattened disk measures 16 arcseconds across the equator and 14 arcseconds pole-to-pole. Catch it below and to the right of the young crescent Moon on the 24th.

Jupiter is now lost in our evening twilight as it nears the Sun’s far side on the 26th. Saturn is not alone as an evening planet, though, for both Neptune and Uranus are well placed. They are plotted on our southern chart in Aquarius and Pisces respectively but we can obtain more detailed and helpful diagrams of their position via a Web search for a Neptune or Uranus “finder chart” – simply asking for a “chart” is more likely to lead you to astrological nonsense.

Neptune, dimly visible through binoculars at magnitude 7.8, lies only 0.6° south-east (below-left) of the star Lambda Aquarii at present and tracks slowly westwards to sit a similar distance south of Lambda by the 31st. It lies 4,346 million km away on the 1st and its bluish disk is a mere 2.3 arcseconds wide.

Uranus reaches opposition on the 19th when it stands directly opposite the Sun and 2,830 million km from Earth. At magnitude 5.7 it is just visible to the unaided eye in a good dark sky, and easy through binoculars. Currently 1.3° north-west of the star Omicron Piscium and also edging westwards, it shows a bluish-green 3.7 arcseconds disk if viewed telescopically.

North of Aquarius and Pisces are Pegasus and Andromeda, the former being famous for its relatively barren Square while the fuzzy smudge of the Andromeda Galaxy, M31, lies 2.5 million light years away and is easy to glimpse through binoculars if not always with the naked eye.

Mercury slips through superior conjunction on the Sun’s far side on the 8th and is out of sight. Venus remains resplendent at magnitude -3.9 in the east before dawn though it does rise later and stand lower each morning. On the 1st, it rises for Edinburgh at 04:44 BST (03:44 GMT) and climbs to stand 20° high at sunrise. By the month’s end, it rises at 05:30 GMT and is 13° high at sunrise. Against the background stars, it speeds from Leo to lie 5° above Virgo’s star Spica by the 31st.

Mars is another morning object, though almost 200 times dimmer at magnitude 1.8 as it moves from 2.6° below-left of Venus on the 1st to 16° above-right of Venus on the 31st. The pair pass within a Moon’s breadth of each other on the 5th and 6th when Venus appears 11 arcseconds in diameter and 91% sunlit and Mars (like Uranus) is a mere 3.7 arcseconds wide.

Comet Halley was last closest to the Sun in 1986 and will not return again until 2061. Twice each year, though, the Earth cuts through Halley’s orbit around the Sun and encounters some of the dusty debris it has released into its path over past millennia. The resulting pair of meteor showers are the Eta Aquarids in early-May and the Orionids later this month. Although the former is a fine shower for watchers in the southern hemisphere, it yields only the occasional meteor in Scotland’s morning twilight.

The Orionids are best seen in the morning sky, too, and produce fewer than half the meteors of our main annual displays. This time the very young Moon offers no interference during the shower’s broad peak between the 21st and 23rd. In fact, Orionids appear throughout the latter half of October as they diverge from a radiant point in the region to the north and east of the bright red supergiant star Betelgeuse in Orion’s shoulder and close to the feet of Gemini. Note that they streak in all parts of the sky, not just around the radiant.

Orionids begin to appear when the radiant rises in the east-north-east at our map times, building in number until it passes around 50° high in the south before dawn. Under ideal conditions, with the radiant overhead in a black sky, as many as 25 fast meteors might be counted in one hour with many leave glowing trains in their wake. Rates were considerably higher than this between 2006 and 2009, so there is the potential for another pleasant surprise.

This is a slightly revised version of Alan’s article published in The Scotsman on September 30th 2017, with thanks to the newspaper for permission to republish here.